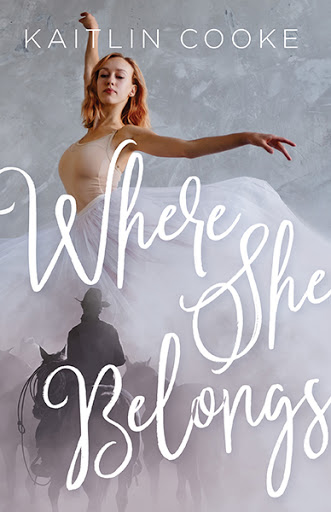 Where She Belongs
by Kaitlin Cooke

Ten years ago, Amelia left her hometown of Sierra Blanca, Texas to pursue her dream of becoming a professional dancer in New York City. Now, tragedy has ripped her life apart, and she finds herself driving south across the country to solve the mystery of her pain.

But it wasn’t only her hometown she left behind in Texas. Waiting for her there is Dawson, her teenage love. As they grew up together, Dawson was a source of safety for Amelia, so it’s no wonder why she is again seeking the warmth of his embrace. But much has changed, and Amelia is unaware of what Dawson does for a living, and how it triggers her worst fears. Dawson is a bull rider, which gives him a sense of excitement and mental clarity, even though it could kill him. When Amelia shows up in Sierra Blanca, and they inevitably fall deeply in love, Dawson silently wrestles over whether or not he should tell her about the bull riding, and risk losing her—again.

When the secret is messily revealed, emotions fly, and more of Amelia’s repressed tragedies bubble to the surface. The two cling to each other despite their differences and choices, but eventually, Dawson’s refusal to show vulnerability gives her the push she needs to get back on her own path.

With their long history and deep bond, will their love be enough to bring them together despite all the tragedy and pain, both physical and emotional? Will Amelia, forever feeling lost, finally find the place where she belongs?

"Both characters are crafted with care. Their careers, relationships, friendships, devotion to family, and hobbies are all detailed. The story alternates between their points of view, allowing unrestricted access to their minds.... Where She Belongs is an enjoyable small-town romance with childhood sweethearts navigating adulthood at its core."

Kaitlin Cooke has been a writer for as long as she can remember. Growing up, she excelled in English and Creative Writing courses, and wrote creatively as a hobby. She was a dancer for fifteen years, which helped to inspire her first book, Where She Belongs. A sequel is forthcoming. She currently resides in the small town of Corner Brook in Newfoundland with her two cats, Poo and Jay.