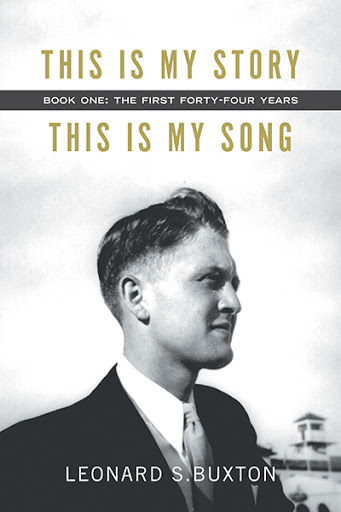 This Is My Story, This Is My Song
Book One: The First Forty-Four Years by Leonard S. Buxton

The first of two volumes to be published, in This is my Story, This is my Song, Leonard S. Buxton recounts the first half of his engaging life and his long career in ministry. He has written a very entertaining personal account of his upbringing as the son of a fire-and-brimstone Evangelical preacher during the Depression, the beginnings of his political consciousness through WWll, his college life and the strict mores of the 1950s, and moving from parish to parish with his young family during the turbulent social change of the 1960s and early 1970s. As a professor of psychology at Claflin, a black university in South Carolina, Leonard recalls his activism within the church—and literally in his own backyard—to break down the resistance to desegregation and to support the civil rights movement.

This book is filled with evocative photographs and colorful firsthand history, its joys and heartbreaks: Studebakers and VWs, the Red Sox and Yankees, teen hang-outs in drugstores, music, dramatic productions, and church camping, the serious social stigma of divorce, the illegality of adultery, the scourge of polio, the loss of a child, group ‘encounter sessions,’ George McGovern, Benjamin Spock, Kent State, burning crosses . . .

A man devoted to building congregations as a pastor, psychologist, parish counselor, teacher and activist, Leonard depicts characters and narrates events with remarkable acuity. This book is a rich reflection on his experiences, written with candor and humility, and observing people and events through the kind lens of his dedication to serving others and his evolving faith as a Methodist minister. To quote one of Leonard’s aspirations for this memoir, “For those still casting around an unclear future, this may say ‘Take heart; life will be full of surprises.’”

Len Buxton was born in Ephrata, Pennsylvania, May 21, 1930, the youngest of three sons, and raised in Evangelical United Brethren Church parsonages. He studied at Albright College in Reading, Pennsylvania, and attended seminary there, as well as the Boston University School of Theology before becoming a Methodist minister.

Leonard earned a graduate degree in psychology, specializing in pastoral counseling, and taught psychology at Claflin University and Benedict College, Columbia South Carolina. He has served many congregations on the east coast of the United States in his long career in ministry.

Leonard and his wife, Tita, have three sons. They have been married for sixty-two years and live in Wesley Village, a United Methodist retirement community, in Pittston, Pennsylvania.