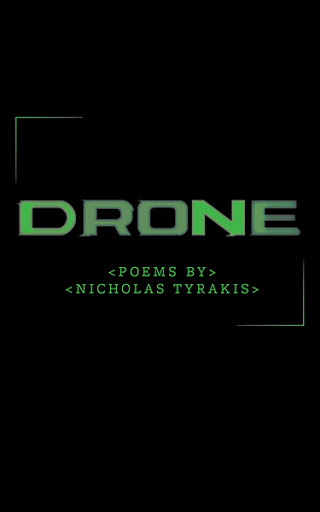 Individualism, technological expression, power and corruption, post-apocalypticism, nihilism— these are the main themes of Drone. Drone is a collection of poems written by inanimate objects and elements, represented by each title, in a nonexistent futuristic dystopia. There is no clear storyline, and the backstory as to how human inventions were left behind, and how they achieved the ability to write with close-to humanlike emotion, has been purposely omitted by the author. Therefore, this collection should be considered as what the author terms, “intellectual clues left behind by man- made inventions . . . if technology reached a point of creative expression that would place human[s] as the primary listener.” Presented as a concept of what poems would be like if expressed by human creations, the tone of this collection is one of honesty and the messages focused, compelling, and engaging.

This book is perfect for readers with a keen interest in creative thought within the context of a dystopian future, those willing to step into a world where non-breathing inventions have reached the power of expressing intellect, and young adults and mature readers seeking diversity of the art that binds poetic expression.

Nicholas Tyrakis (aka, Nicky Tee) is a Greek poet born in the city of Buenos Aires, Argentina, growing up in Los Angeles, Tokyo, and Montreal. As a teen, Nicky would distribute copies of handmade zines, including his poetry. His poetry has appeared in literary magazines and collections, both online and in print, in Montreal, Toronto, and New York. And he has given numerous poetry readings in both Montreal and Toronto.

Alluding to the inspiration for Drone, Nicky speaks of his experience with the various stages of technological consumption and the fear of a loss of creative input, which allowed him to create a collection of poetry that he views as “the best-case scenario in a fictional, far-away future that is no longer governed by people.”

Nicky currently lives in an antique apartment in Montreal. Drone is his first book.

Drone will be available in the FriesenPress Bookstore soon.