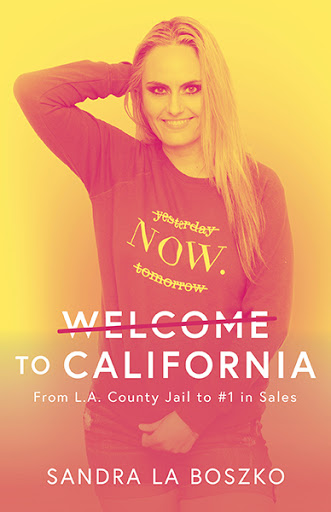 Welcome to California
From L.A. County Jail to #1 in Sales
by Sandra L.A. Boszko

A stunning, funny, and heartbreaking memoir, Welcome to California recalls one woman’s diagnosis with bipolar disorder, which ultimately leads to her wrongful and traumatic incarceration in the Los Angeles County jail system.

At age thirty-one, Sandra Boszko leaves her Winnipeg home for Hollywood with two secrets: her desire to perform and her mental illness. Although her health has already twice sent her packing from L.A.’s world of acting schools, auditions, and stunt work, she’s determined to succeed this time. But shortly after her arrival, Sandra’s mind clicks into a manic state, and within twenty-four hours she finds herself in the worst hell imaginable: detained and manic in a system that refuses to follow protocol for inmates with mental illness.

While her family scrambles to find her in the system and convince the courts she requires medical care, Sandra is subjected to a nightmare within a nightmare. As her mind spirals with delusion, she experiences abusive guards, isolation, and neglect. By the time she’s finally released for hospitalization, the damage is done.

This memoir chronicles not only Sandra’s health, struggles, and achievements after release, but also her life before as an ambitious, positive, and bright young woman growing up in Canada amongst loving family and friends. Welcome to California details how bipolar has affected Sandra’s life with remarkable clarity and depth. It examines the devastating effects of stigma and miseducation surrounding mental illness, as well as the frightening statistics of mentally ill inmates in the California prison system and beyond. Perhaps most importantly, this book explores the miracle of compassion, and the beauty in perseverance and healing.

Named one of the best Indie books of 2021 by Independent Book Publishing Professionals Group.

Next Generation Indie Book Awards in:

Sandra Boszko started writing to process the trauma of her wrongful incarceration and struggles with bipolar disorder. Welcome to California is her first book and she hopes it will help others understand mental illness from the inside out. She lives in Calgary, Alberta.