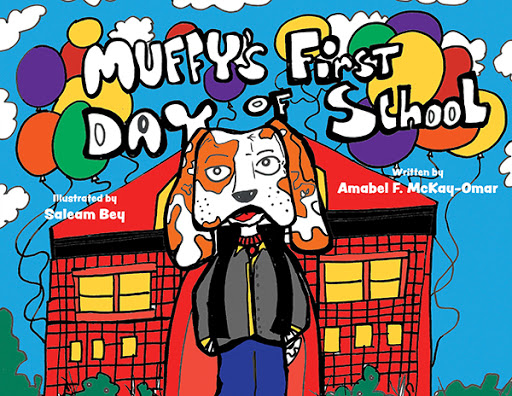 Muffy's First Day Of School is for young children between 3-5 years old. It is the story of a pup, who having been teased for his bright orange spots, by other dogs in the park, hides in a closet when school begins.. He is afraid that the other pups in the class will tease him.

The teacher finds him and convinces him that teasing was not allowed in that school. Muffy comes out and joins the class and the day goes well.

happily together. At the end of the day, Miss Potts, the teacher, gets the pups in a circle to each share their feelings about their first day of school. She gives each pup a reward card for their hard work, before leading them to the bus.

Parents and teachers can use this book to explore with children, feelings about teasing, to help them to avoid such behavior themselves and learn how to handle being teased.

The main themes of this book are that being different doesn't have to be scary and that adults can create an atmosphere where differences do not define, but, are respected and accepted.

The cartoon-like illustrations, depict the diversity one encounters in many classrooms and are humorous and appealing.

Muffy's ability to discuss his fear of being teased and how teasing makes him feel, can encourage young children to also define and describe their fears.

Amabel McKay Omar is a nonagenarian who was born in Jamaica. She has a Master Of Science degree in Education and has taught in early childhood programs; day-care, Head Start, private and public schools. She has designed curricula for those programs and trained teachers and parents. She has been, a college instructor, trainer for two Follow Through models, director of training for a large foster care and adoption agency, in New York City.

She has written a novel and a book of poems since her retirement and spends most of her time writing. She enjoys Caribbean food and music and spending time with her two children and two grandchildren.