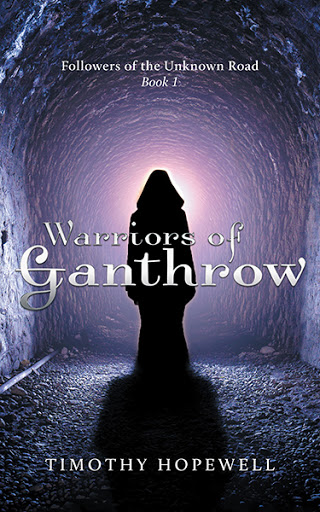 The Warriors of Ganthrow
by Timothy Hopewell

Betrayal. Brennan Garthran, half-elf prince of the island nation of Ganthrow, along with his twin sister, Lauren, abandon their ancestral home. Forced into exile by a traitorous noble family, they must fight to reclaim their birthright against fierce and cunning enemies. Meanwhile, an ancient cult strives to awaken long-forgotten gods from their slumber.

The Warriors of Ganthrow: Followers of the Unknown Road is an action-packed epic that will delight fans of fantasy fiction everywhere. In its pages, dragons, goblins, and monsters battle alongside warriors, priestesses, elves, and rogues. As readers accompany Brennan and his fast-talking companion, Kyle, over land and sea, they will meet a host of memorable, frightening, and sometimes quirky characters—not to mention gods like Magmellon, the Elder Goddess, and Morgean, God of Death.

The Warriors of Ganthrow is the first book in the Followers of the Unknown Road series.

Timothy Hopewell has been writing for almost twenty years. Initial forays into his ever-expanding fantasy world received a warm reception and enthusiastic following online, along with Hopewell’s other fantasy fiction, providing the impetus to fully develop The Warriors of Ganthrow: Followers of the Unknown Road. Hopewell is an avid gamer, a seasoned Dungeons and Dragons player, and a lover of the fantasy genre in all its manifestations. He lives in Ottawa, Ontario, with a friend and a traitorous cat.