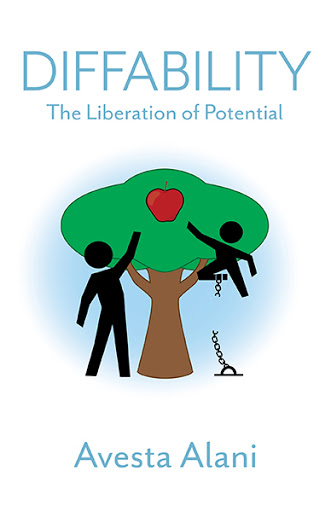 Diffability
The Liberation of Potential
by Avesta Alani

The goal of this book is to attempt to begin a discussion and a movement to reform the conception of disability through language. We always try to tackle the barriers persons with disabilities have in society from a sociological or administrative perspective, and take the conception of disability as a given. It is time to take one step back and reform the ideology at the root of it. This book takes you through the philosophical history of how this present day ideology arose, its implications, why and how to reform it, the effects of the change, while also recognizing potential challenges in this pursuit. This book utilizes theories from Plato and Hegel, among many other prominent philosophers, while at the same time looks at the construction of language and words in both English and other languages to develop the premise that disability is an internationally misconstrued term. “Disability” in and of itself is a limiting conception, and we must liberate the potential with the “Diffability” movement. It is not that one cannot do something, but rather that it is done differently. It is a must read for anyone interested in disability issues, philosophy, and of linguistics and psychology. I invite you to read and to participate in the discussion.

The start of a reform and rebranding of an ideology.

Avesta Alani, born May 1995 is legally blind. She graduated with an Honours in International Development and Globalization with a Minor in Philosophy from the University of Ottawa in April 2017, and will graduate from Osgoode Hall Law School in Toronto in April 2020. Avesta is a member of the Canadian National Institute for the Blind's national Youth Council for over 4 years, and has been advocating for disability issues for over 7. Avesta is the winner of the Celebration of People Award, and Spirit of the Capital Youth Award, among other notable achievements. Avesta has facilitated workshops to students, educators, parents and professionals in the field, and has presented at national conferences on disability advocacy. She worked with the National Education Association for Disabled Students as a consultant on disability programs. In her professional career, Avesta has worked with Pearson Education’s legal team, and with Borden Ladner Gervais LLP.