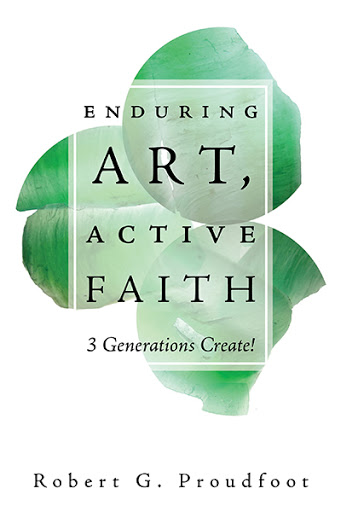 A sense of reverence, celebration, and respect shines through Robert’s writing and that of the rest of his family. This book includes the work of several artistic but passionate individuals: Norma Proudfoot (mother), Alicia and Annora (daughters), and Valerie (wife) in collaboration with her friend, Donna Entz, a former West African missionary and celebrated Edmonton friendship bridge builder with Christians, Jews, and Muslims.

Part I, African Safaris, highlights Robert and Valerie's poignant cross-cultural experiences while working for Mennonite Central Committee (MCC) as an agro-forester and a primary healthcare nurse, respectively, among Kanuri Africans in northeastern Nigeria from 1988 to 1991. The Guard short story harkens back to Lusaka, southern Africa during the early 1970s, when recently independent Zambia was coming of age as a vibrant, African-dominant society, while European colonialism and apartheid were fading from the scene.

Part II, What If?, is a diverse collection of essays, short stories, and poetry that deal with serious, rather dark themes, including: sacrifices made by minorities to assimilate into mainstream Canadian culture; loss of family mixed farms; the need for Christians, Jews, and Muslims to collaborate; validity of war crimes; reconciliation between indigenous and settler Canadians; an awakening of a young husband to his wife's bipolar mental health; and a young woman's relations with boyfriends and God.

Part III, On a Lighter Note, is a collection of prose and poetry about: humans encountering nature and the supernatural; young men learning to better relate with women and their elders; friendship built through a mutual interest in sports; musings about our relationship with God; and inter-generational fellowship.

Part IV, Family Memories, reflects on Robert's extended family: Norma's ties to Prince Edward Island; the loss of Norma's brother Gordon in a northern Alberta plane crash; and Robert's bittersweet struggle with being a Mennonite pacifist despite his respect for his ancestors who were decorated war heroes in battles to protect Canada's sovereignty.

Robert G. Proudfoot is a professional technical writer and environmental scientist who has also been a creative writer most of his life. He has written several essays and short stories about his experiences and learnings, particularly cross-cultural (with African, Muslim, or indigenous people) or social struggles (justice with mercy, marginalization of people, and a fair-trade market place). He writes about things that are difficult to explore, share, and articulate, such as human rights abuses, mental illness, racism, and poverty.

Robert lives in Edmonton, Alberta, with his wife Valerie (a recreational director for people with disabilities) and elder daughter Annora (a massage therapist). They enjoy living in this vibrant, multicultural city, which intentionally walks in reconciliation and collaboration with indigenous peoples and newcomers. Alicia Proudfoot, an emerging sculpturer, creative writer and musician, is completing her Master’s Degree in Fine Arts at Nova Scotia College of Art and Design in Halifax.

Robert feels that with the unique reality of three generations of his family actively involved creating art, they should celebrate by sharing with others and helping them to explore and expand their own artistic talents. He believes he and his family are humble creators, who understand that God has given them whatever talents they have to share with others and thus edify Him.