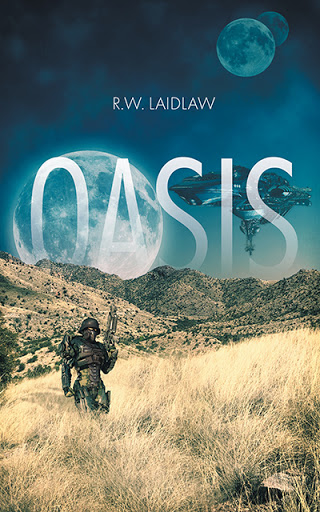 For centuries, the Cantos have been expanding their interstellar empire, in a relentless drive for conquest. Their headlong rush through the galaxy brought them into contact with humans, igniting a war that has raged for years in outer space and on countless planets...including the nameless world where Sgt. Travis Kees serves as a sniper in Space Command.

When Kees’s base and one other are destroyed in a surprise attack by the Cantos, utilizing a new and devastating flying weapons platform, it’s up to him to warn the 96th Marines, far to the north, before they suffer the same fate.

Along the way he finds other survivors—and many of the Cantos’ new “battlewagons,” hidden in the hills in preparation for the attack on the 96th. He and his ragtag band steal several of the weapons platforms and deliver them to the endangered base. Thanks to them, the 96th barely survives the first attack—but not the second. When the Cantos strike again, with vastly improved weapons, the base falls, and almost 2,000 marines are taken prisoner.

Once more it’s up to Kees to salvage the situation: with a small band of trainee snipers, he rescues the prisoners. The crater of a long-ago meteor strike provides them with a hiding place, an oasis in the vast alien prairie. Inside its sheltering walls, they’re able to hide from the searching Cantos long enough to recover and rebuild. Through the genius and ingenuity of a lowly communications technician, Cpl. Richard Pratt, they improve on their stolen weapons, develop their own new technology, and renew contact with their space fleet.

But the Cantos have not been idle, either. When First Prefec Jar’l of the Cantos, the mastermind behind the aliens’ deadly battlewagons, locates the Oasis and brings all his might to bear against it, will human courage and ingenuity, however great, be enough...or will humanity lose its last stronghold on this key world—and eventually, the war?

R.W. Laidlaw has always enjoyed reading science fiction and grew up with Star Trek and Captain Kirk. For years he had a scene in his mind that he thought could serve as the seed for an interesting story. With a friend’s encouragement, he wrote Oasis. Laidlaw lives with his wife, Fran, in Port Coquitlam, B.C., a quiet community nestled next to the mountains and surrounded on three sides by rivers. They enjoy camping and rowing in their homemade cedar cosine wherry.

Oasis will be available in the FriesenPress Bookstore soon.