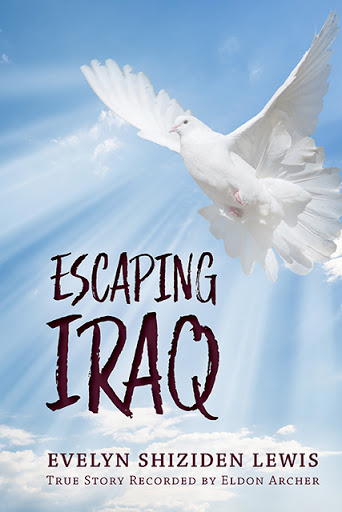 “Escaping Iraq” is a true story exactly as Evelyn Shizodin Lewis lived it. As an Assyrian girl born in Iraq her story will keep readers gripped in her story of living through three wars, all under Ṣaddām Hussein’s rein. Her story takes the reader through her youth giving details of Christians living in a Moslem world. History buffs will be rewarded as she tells stories related by her dad and mother who were both born in North Iraq, land of the Kurds.

The burning desire for personal and religious freedoms required her family of eleven to use many plans of escape. The reader will learn how her family was split up and were spread over nine countries, shuffling from country to country as refugees. There are so many stories within her story.

Escaping through Kurdish country with her husband who was AWOL and would have been shot on sight if caught by the Iraqi military, traversing a mine field and its near disaster, crossing the Aegean Sea in a small extremely overloaded boat in the middle of the night, and being jailed twice, will keep the reader mesmerized until her stories happy ending

Squire Rushnell would call the completion of this book a Divine Alignment. A young foreign-born girl under the yoke of Saddam Hussein, now living the American dream, accepting a job as caregiver to an eighty-five year old crippled stroke victim, who has written previous books is more than a coincidence.

This is a book neither Evelyn nor Eldon had any intention of being written. The painful memories Evelyn would have to relive were far to great and the fact that Eldon’s crippled hands only allowed him to type on his key board one letter at a time were not elements for the efforts required.

Eventually, both agreed that the prices human beings are willing to pay for freedom was the motivation for them to see Escaping Iraq in print.

Eldon Archer’s previous books are: I Stood on a Knoll South of Norton, Slices of Eden, and Stories by Eldon of Norton. He is currently writing his fifth book, Angel Glitter.