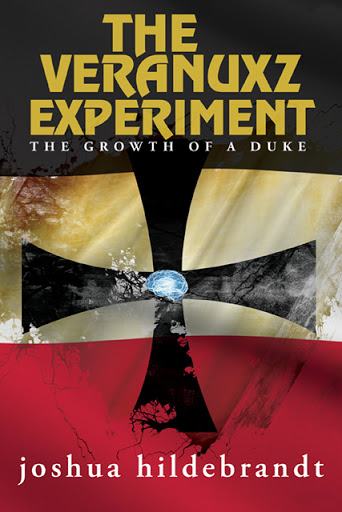 The Veranuxz Experiment
The Growth Of A Duke by Joshua Hildebrandt

In the untold beginnings of Earth’s history, a highly-sophisticated alien race seeded the planet with human DNA. In that intervention, they planted the Kowalewski bloodline, a lineage that inherited not just more of the interstellar farming scientists’ DNA than any of other, but also an uncontrollable yearning for knowledge and power. The Kowalewski bloodline traces its roots to ancient Sumer and a revered medicine man named Tao, who initiated early experiments on the human brain. Whether he acts purely out of spiritual curiosity, in pursuit of scientific knowledge, or is working at the shadowy behest of parties unknown is unclear What is clear is that Tao’s grisly experiments on mapping the human brain are passed forward to his descendants and that their knowledge has increased and dispersed as the bloodline has branched and branched again.

In Germany at the dawn of the twentieth century, Franz and Edwin Kowalewski are modern scions of the ancient bloodline of Tao. Brilliant scientists, these twins have been operating on each other for most of their adult lives, but recently there are hints of spies and/or saboteurs accessing their research. They move their operations to an old castle in Berlin and send word to their sister, Hannelore, to break off her studies and join them. It is in Berlin that the Kowalewski siblings bear witness to a quantum leap in their research. Franz’s brain, after countless operations at the hands of Edwin, has started rewiring itself. Furthermore, Franz has developed frightening telekinetic abilities. When their research is abruptly cut short by the man who will become the ruthless antagonist of the story, it falls to their nephew Rudolf, Hannelore’s grandson, to volunteer his brain and continue his uncles’ work. In Rudolf, the miracle first seen in Franz’s brain is not only repeated but intensified.

Can Rudolf become “the Duke” and harness this long-sought power of the brain in ways seemingly unimaginable? Or will his metamorphosis also be cut short? Major General Schmidt has long known about the bloodline of Tao and has been watching the Kowalewskis with care. As Schmidt recognizes the potency of their research for transforming the German military, an epic rivalry is born between Schmidt and Rudolf, a rivalry that will play out across Europe and through the eras of Kaiser Wilhelm II and Hitler.

The first of a planned series, The Veranuxz Experiments is a dark, bloodthirsty tale of betrayal, revenge, intrigue, and the morality of power that spans two world wars and beyond.