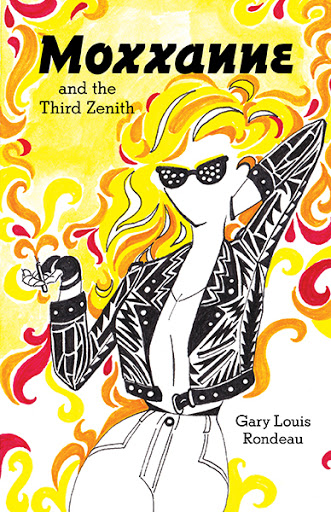 Moxxanne and the Third Zenith
by Gary Louis Rondeau

Tall, buxom and red-headed Moxxanne is a feisty third year law student on a mission. Actually, more than one mission. As a student reporter travelling to Gaylord, Manitoba, she is on assignment to find hometown background on the reclusive author Harry Breen who has eighteen novels to his credit and two successful Hollywood movie adaptations. Arriving in Gaylord, she learns that Harry is now old, dying and apparently broke. Believing Harry to be her biological uncle, she is keenly curious about the author whose novels she’s read while working summer jobs at the publishing house where her mother was once Harry’s editor, and she’s on a mission to convince Harry to part with the third and very valuable in his Zenith book trilogy. Along the way Moxxanne gets to know Orson, Harry’s best friend and fan; Alva, a feisty woman with a colourful past; Guy, Harry’s dour mechanic; and Leonard, Harry’s flying buddy. Together, they paint a picture for Moxxanne of the man she believes is her only biological uncle and who may be the only connection she has to her biological father, aka the sperm donor. However, when Harry requires experimental open heart surgery to save his life, Moxxanne learns that biology is not the only determiner of family.

Gary Rondeau was born in Winnipeg in 1936. It was the times, yes, but it wasn’t long before he had cowboys on the mind. Wrangling cattle. Roaming the range. Shooting the six-guns. A boy’s life, a boy’s dreaming. Gary didn’t know it then, but he was a wrangler too.

He grew up, joined the Navy and sailed the north Pacific. He looked for submarines and wrangled Morse code.

He started a family and got a job wrangling giant transformers. He almost got blown to smithereens but that didn’t stop him.

He sold houses. He ran a construction business. He helped you plan your future. He wrangled a good living for his family.

No horse for this cowboy, but the next best thing: a motorcycle. Gary was all over the continent of those things.

But all this time Gary’s real wrangling was with words. Words are the common thread, his whole life long. Always the words, wrangled into groups and herds and guided over the open range and corralled in safe havens.

Poems. Stories. A novel. And then the songs — so many songs, they just kept coming. They got longer, they were stories again, then they were longer stories…another novel.