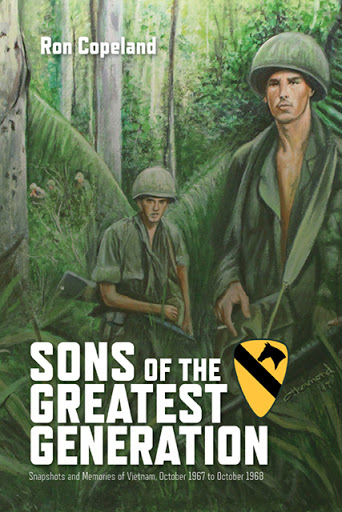 Sons of the Greatest Generation
Snapshots and Memories of Vietnam, October 1967 to October 1968
by Ron Copeland

Like thousands of young men before and after him, in 1967 at just nineteen years old, Ron Copeland was drafted into the US Army, trained as an infantry soldier, and shipped off to Vietnam.

He spent the next year of his life immersed in the fear, fatigue, tedium, and moral ambiguity that comes with life in a combat zone, while forming deep bonds with his fellow soldiers. Contrary to the losers, addicts, and crazed baby killers that Vietnam veterans have been portrayed to be, Ron found them to be “good boys from every corner of our country, black and white, rich and poor, who did as we were told, the best job we could.” From Ron’s point of view, he and his fellow soldiers were sons of the “greatest generation”, who wanted only to honor their fathers by answering their nation’s call, just like their fathers did in World War II.

As a soldier with the First Cavalry Division, Ron participated in some of the most pivotal conflicts of the war, including the Tet Offensive and the siege of Khe Sanh. He wrote this book not only as a memoir of his experience but also as an effort to set the record straight concerning the true character of his fellow soldiers. Packed with photos and personal stories, Sons of the Greatest Generation is a fascinating firstperson account of the Vietnam conflict.

After returning from Vietnam, Ron Copeland went through a difficult adjustment period. Finding civilian work boring and unrewarding, he gravitated toward law enforcement, which turned into a thirty-five-year career. Over the years, Ron worked his way up the ranks, starting as a patrolman and then becoming a detective, sergeant, lieutenant, and retiring as a captain with the Shawnee, Kansas Police Department.

Ron and Terry, his wife of forty-two years, have three children, six grandchildren, and one great-grandchild. When he isn’t writing, Ron can be found honing his horsemanship skills, taking art classes, traveling with Terry, and spending time with their children and grandchildren. Ron and Terry live in the Kansas City area with their bulldog Petunia. Sons of the Greatest Generation is Ron’s first book.