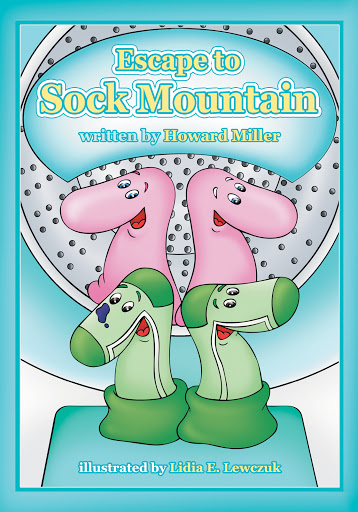 We’ve all lost socks in the laundry. But where do they go? When young Carter hears strange sounds coming from the hamper one night, he discovers the answer. Four unhappy socks are tired of getting mixed in with all those dirty clothes, and they’re not going to take it anymore!

Jelly, Max, Pink and Twin make a daring plan to escape to a magical place called Sock Mountain, and they set out on the adventure of their lives. But when Max gets left behind, suddenly Jelly has a big decision to make. Should he stay in paradise or go back and look for his brother? And can Carter save Max from his new life as a toy for Patch the Dalmatian?

Escape to Sock Mountain is a charming story about friendship and big dreams, sure to delight both children and the young at heart alike.

Howard Miller is a ten-year-old boy trapped in the body of a thirty-something-year-old man. Never more comfortable than when he’s dressed in sweatpants and a hoodie, he is a self-confessed coffee addict, baseball geek, and a fan of the Ottawa Senators. Born creative and notoriously impatient, Howard has always had a passion for writing. He believes it's far harder to write funny than it is to be funny, so he works hard to develop his craft.

His inspiration for Escape to Sock Mountain came from a writing exercise in which he had to construct a paragraph from the perspective of an inanimate object. He chose to write about a disgruntled sock (who wouldn’t?) that disliked living in gym shoes and was plotting to escape in the dryer. Born in Montreal and raised in Ottawa, Howard lives in Stittsville, Ontario, with his wife Sarah and their dogs Barney (née Sir Barnabus Cornelius Griffey IV) and Sheba. He and Sarah still can’t agree on the proper method of folding socks…