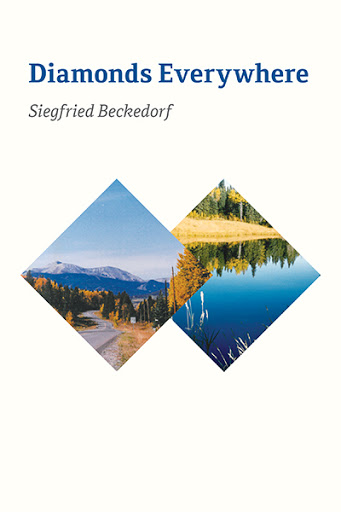 The author is frequently referring to "Diamonds Everywhere" in his story. It had its beginning a few months before World War II when, fifteen years of age, he was infected by Tetanus, fatal, if not treated immediately. He was taken to a military hospital nearby which saved his life due to medication available to treat Tetanus. The experience of waking up to wounded soldiers brought on stretchers into the hospital, screaming in pain, was a great shock. While recuperating with other soldiers, the author was inspired by a young officer, heavily wounded, "Do not let this experience keep you from enjoying life. I am not going back into the trenches! This is an insane war! I feel encouragement in nature, the sparkle of thousands of Diamonds Everywhere from dew, rain and snow on trees and plants. Look at nature's wonders for healing and encouragement." The author and his wife Ursula were inspired by great people to overcome the effects of World War II. Greeted and encouraged by Diamonds Everywhere they enjoyed life filled with songs and music.

"As a writer-in residence for the Calgary Public Library I saw many manuscripts but this memoir, written by well-known Bragg Creeker Sieg Beckedorf, made a special impression on me. DIAMONDS EVERYWHERE offers everything from historical facts to international adventure to mediation on life – all delivered with honesty, humour and an obvious love of life and family."

—Barb Howard, 2015/16 President of the Writers Guild of Alberta

With four brothers and two sisters, Siegfried grew up in a small village south of Hamburg, Germany. Their outdoor activities and explorations of the beautiful surrounding forest, ponds, and meadows was supervised by a maid playing the guitar. Their mother died shortly before World War II when Siegfried was nine years old. The war years left memories of violence, devastation, and death, but also many encouragements like “diamonds everywhere.” With an urge to see the world, Siegfried and two brothers sailed to Canada in 1951 for a two-year adventure, not realizing they may not come back in that time frame. Their travels led them to Calgary at the time of the Calgary Stampede. At a dance, Siegfried met Ursula and her twin, Brigitte. Ursula was a beautiful dancer and instructor at the Arthur Murray School of Dance. While dancing, she sang along with the band. Siegfried was in awe. He forgot all about returning to Germany as planned. They got married in 1955, settled down in Calgary, and later followed a dream to move to Bragg Creek in the foothills west of Calgary. Brigitte married Siegfried’s brother, Herbert. The Beckedorf Twins entertained with guitar and song at many festivities in Calgary and in the Bragg Creek area. While Ursula participated substantially in building an artistic and resourceful community in Bragg Creek, Siegfried got involved in land development and international business. Ursula and Siegfried traveled frequently. The highlight was a flight to Namibia, Southwest Africa, the twins’ place of birth. The couple celebrated their sixtieth wedding anniversary, and the fiftieth anniversary of their having been residents of the Bragg Creek area, in 2015. A life of song and music came to an end when Ursula died in their home in September 2015.