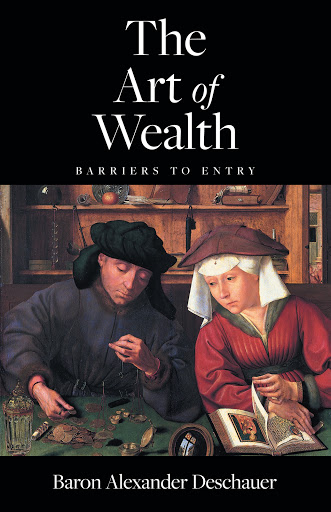 The Art of Wealth
Barriers to Entry
by Baron Alexander Deschauer

Becoming rich or, better yet, wealthy requires a certain mind-set. Becoming wealthy is fairly straight forward—theoretically. In practice, there are hurdles that most of us don’t even see. These are the barriers to entry that allow many in society to claim that opportunity exists for all of us—but in reality are closed to most of us. The first thing in overcoming these barriers is to be able to learn how to see the barriers. Once you learn to see, you will be able to overcome.

This book sets out in short stories and narratives the secrets to developing the mind-set of the wealthy. It will provide you with the tried and tested truths behind accumulating riches and wealth.

To be rich is to have lots of something.

Wealth is the capacity to generate more; it is the store of riches over time and is available to be drawn upon over time.

Baron A. Deschauer was born in Winnipeg, Canada the fifth of six children. He is married and currently lives in the Channel Islands. It took 45 years of living and writing and travel and study before Baron was satisfied that what he wrote was worth reading. In this, the second book that Baron has written (alongside Revelation), he sets out the wisdom gleaned from his life thus far. From the Great Wall to the Wailing Wall, from the pyramids to the pentagon, from the kitchen table to the boardroom table, Baron has travelled the world and lived in the world. He is an entrepreneur and property developer who retired at age 40. Equally torn between the Church and Military and Academia, he received his B.Ed and LLB before leaving Canada to pursue his business interests in the UK.