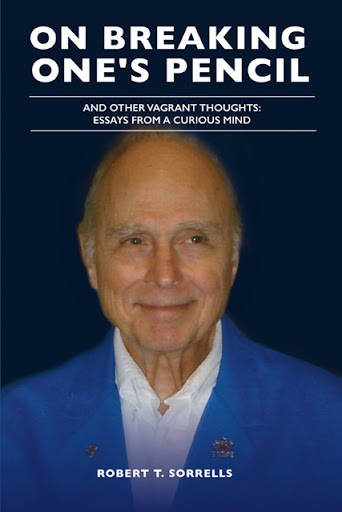 On Breaking One's Pencil
And Other Vagrant Thoughts: Essays from a Curious Mind
by Robert T. Sorrells

The book is divided into six major parts: PLACES, WRITING ADVICE, CHURCH MATTERS, PREVIOUSLY PUBLISHED ESSAYS, ESSAYS, and ALL IN THE FAMILY.

It closes with the traditional -30- that used to tell newspapermen working on stories that the story was completed, that there was no more copy coming in on that story.

Robert T. Sorrells is a fiction writer whose stories have been published in a number of magazines including Penthouse, Playgirl, and American Review. His book of stories, The Blacktop Champion of Ickey Honey, was published by the University of Arkansas Press, and he has been anthologized in The Best American Short Stories series (twice); Tennis and the Meaning of Life: a Literary Anthology of the Game; Full Court: a Literary Anthology of Basketball, and the LSU Press anthology Southern Writing in the Sixties.

His story “A Fan of the Game” brought Sorrells a PEN/NEA Syndicated Fiction Award, and he also has been the recipient of a grant from the National Endowment for the Arts.

His non-fiction work has included writing brochures for Vanderbilt University’s $30,000,000 capital gifts campaign; being commissioned to write a history of Clemson University’s Experimental Forest; writing and narrating programs for a land-use film for the state of South Carolina, as well as working as an editor for Clemson University’s Publications and Graphics Department.