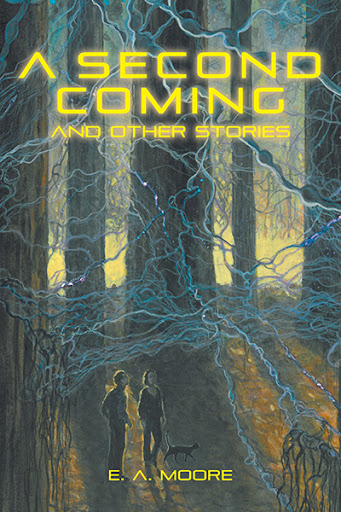 A Second Coming and Other Stories
by E. A. Moore

After a sudden, silent, but brilliantly dazzling meteor shower one night, nothing seems very much different…except for an odd little fungus that appears on computer consultant Stanley’s deck next morning. But then his cat Livingston begins acting strangely and has what seems to be a fatal seizure. This is the prelude to a suspenseful and romantically enlightening journey of discovery into the Oregon wilderness for Stanley and the feisty but alluring veterinarian Penelope. It might also mark the beginning of a whole new epoch of human/animal/alien relations. That’s the gist of A Second Coming, the first in this witty little collection of science fiction and magical reality that takes the reader on a comic trek around the galaxy and back again. From extra-terrestrial bureaucratic disputes, to a magical cure for foot-in-mouth gaffes, to an up-to-the minute twist on the revenge of the machines, A Second Coming and Other Stories will keep readers amused and musing about both the past and the future with every page turn.

“Four engaging tales told in the tradition of Arthur C. Clarke and Rod Serling, this book is a don’t miss for affectionados of the bizarre.” — James Hanna, author of The Siege and Call Me Pomeroy

“Grand...I absolutely loved this!!! Intelligent, enigmatic...great fun to read...I will be telling my friends about this one...” — APHELION, The Webzine of Science Fiction and Fantasy

E.A. Moore has published his short stories in science fiction magazines and literary journals. He is also an award-winning playwright and has had plays produced in both the United States and New Zealand where he lived for a time. He now lives in Silicon Valley with his wife and several backyard chickens, but no cat.

A Second Coming and Other Stories will be available in the FriesenPress Bookstore soon.