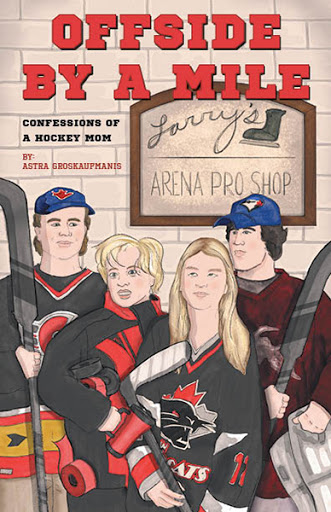 When four-year-old Conner starts pleading for hockey skates, his mother’s dreamy fantasies of après ski’s toasty fires, charming chalets, and chilled chardonnay rapidly evaporate. Soon, Astra reluctantly raises the white flag to the culture of hockey, and life becomes a whirlwind of early morning alarms, minivans stuffed with massive amounts of goalie equipment, ice-cold arenas, and appalling nutrition. Offside by a Mile – Confessions of a Hockey Mom, chronicles the frantic and frequently hilarious challenges of one family’s fourteen-year odyssey into the world of minor hockey. The universal challenges, joys, and sorrows of supporting childhood passions at the cost of home-decorating ambitions, healthy diet avowals, personal time, gobs of money, full-nights’ sleep, or any sort of downtime or personal freedom will be recognizable to parents everywhere. But with its wickedly frank and funny perspectives, Offside by a Mile offers a bubbly and refreshing tonic for it all. 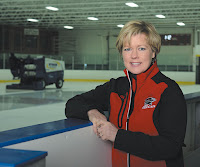 Outside of inhaling Zamboni fumes as a hockey mom, Astra Groskaufmanis is a human resources professional in Ottawa. Her writing has appeared in the Ottawa Citizen, the Momoir Project, Minor Hockey News, and the YummyMummyClub. She is a weekly contributor to HockeyNow’s online magazine. Her short story, “The Angels of Hockey” was published in Chicken Soup for the Soul – O Canada: The Wonders of Winter (November 2013). You can find her poking fun at herself, motherhood, and minor hockey on her blog, The Dustbunny Chronicles http://www.astragroskaufmanis.com/, on Twitter at @mydustbunnies, and on Facebook at https://www.facebook.com/TheDustbunnyChronicles. Astra lives with her husband, and their three children, in Manotick, Ontario.