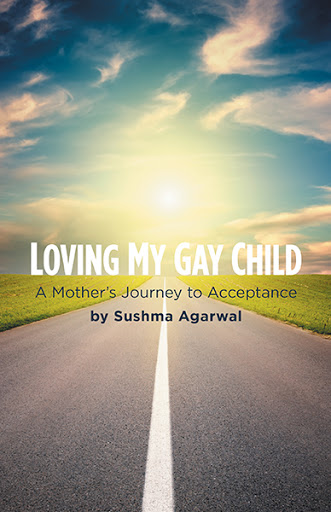 Like many parents, Sushma and Vijay Agarwal expected both of their sons to grow up, marry a lovely girl, and raise a family. When their younger son told them in 2004 that he was gay, Sushma was devastated. She wanted to know why this had happened to her family, who was to blame, and what she should do next.

To come to terms with her son’s sexual orientation, she began to educate herself about homosexuality, a topic that Sushma had no exposure to. She went to counseling and attended PFLAG (Parents and Friends of Lesbians and Gays) meetings. After much soul searching and many conversations with her son, husband, and others, Sushma accepted her son for who he was.

In Loving My Gay Child, Sushma reveals how she came to terms with her son’s orientation, shared the news with friends and family, and finally threw a beautiful traditional gay Hindu wedding for her son and his fiancé.

One of the things that makes this such a great book for parents with LGBT kids is Sushma’s love and honesty in telling her family’s story. It is a terrific addition to our library of books for parents.

Inspired by unconditional love, a courageous mother comes to terms with society's misconceptions about LGBT-identified individuals and learns to accept and adore her gay son.

This inspiring book is a must read guide, not only for anyone with an LGBT family member, but also for care providers. As a family physician, the wisdom and information gleaned from this book will definitely help me in caring for and counseling LGBT patients and their families in my practice.

Sushma Agarwal was born and raised in New Delhi, India. After graduating at Delhi University, she married her husband, Vijay Agarwal, and moved to Canada in 1975. She became a mother in 1978 and again in 1980. While raising her two boys, Sushma worked in a number of fields, starting as a bank teller at Canada Trust and working her way up to owning her own business as a Certified Financial Planner selling financial products such as life insurance and mutual funds.

After her journey with her gay son, Sushma vowed to help other parents, especially those in the Indian diaspora, cope with the pain that comes when a child reveals he or she is gay. Her hope is that Loving My Gay Child, written by an Indo-Canadian author from a mother’s perspective, will help others come to terms with their feelings and accept their children for who they are. She believes that all families, regardless of their culture and traditions, can overcome the hurt and shock they feel after learning that their loved one is gay.

Sushma currently lives in Oakville, Ontario, with her husband. She enjoys playing with her grandchildren and studying spiritual teachings on human behavior. She continues to be active in PFLAG (Parents and Friends of Lesbians and Gays).