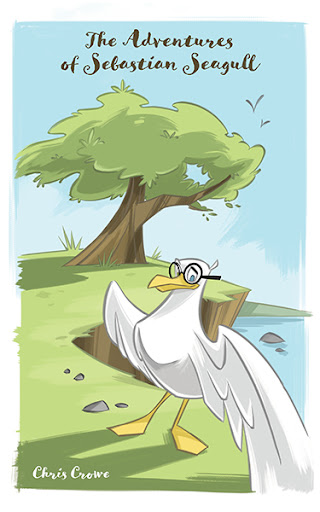 The Adventures of Sebastian Seagull
by Chris Crowe

Life is a breeze for Sebastian’s friends, as they play and swoop for scraps in the sunshine. But not for Sebastian Seagull. He can’t join in because he has trouble with his eyesight. When Sebastian narrowly avoids becoming lunch for a hungry tomcat, his mother sends him off in search of the famed seagull eye specialist Dr. Gladstone.

And so begins a series of adventures, as Dr. Gladstone’s magical cure allows Sebastian to help his colony, team up with the lovely policewoman, Jenny Wren, and pit himself against characters such as the thieving crow, Clancy Joe. Will Sebastian be able to foil the prowling rogue, Big Ginger Tom? Can he rescue the missing teddy? And will he be able to solve the mysterious case of the stolen wedding ring?

Written in humorous rhyming verse and colourfully illustrated, The Adventures of Sebastian Seagull will appeal to children 3–7 years old as well as to those who are young at heart, and love the shorelines and landmarks of coastal British Columbia, where it is set.

Chris Crowe is a published author of fiction, a lyricist for musical scores, and has written several hundred poems. The Adventures of Sebastian Seagull was inspired by witnessing a seagull’s triumphant escape from a large ginger cat and is his first published work entirely in rhythmic rhyme.

He lives in Victoria, British Columbia with his wife, Maureen.