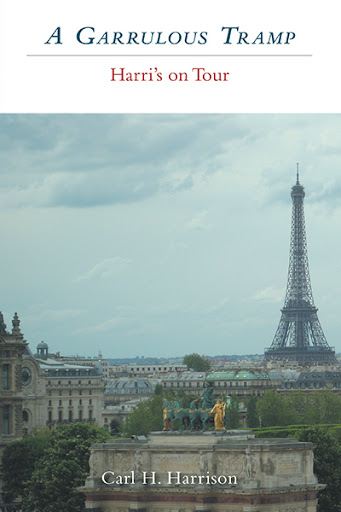 A Garrulous Tramp
Harri's on Tour
by Carl H. Harrison

After a career in Canadian banking Carl decided to retire early from gainful employment. He wanted to travel down the roads he had day-dreamed of during his working years. So off he went to achieve fulfilment of those travelling desires.

A Garrulous Tramp is the third light-hearted Harri’s on Tour travel tale. He joyfully recounts the adventures, sights and the many people he came across during his sojourn in Great Britain and Paris. Travel along with Carl to Stonehenge, Old Sarum, Rosslyn Chapel and many castles, some more ruined than others. Ride along on the Eurostar beneath the waves to the City of Light, tramp with him down ancient city streets and in the countryside and get a sense of old world history.

Carl H. Harrison was born in Hull, England. At age three his family immigrated to Winnipeg, Manitoba in Canada where he grew up. After graduation from the University of Manitoba he started a career with the Canadian Imperial Bank of Commerce. In 2008, thinking thirty-one years seemed like enough he retired early to spend time travelling. His first journey was a hundred mile jaunt in the north of England walking alongside the ancient Roman border fortification of Hadrian’s Wall. It became his first book, A Tramp in England. A 2011 venture across the United States by rail became A Tramp on the Line. 2012’s travels in England, Paris and southern Scotland has resulted in A Garrulous Tramp. Carl has two daughters and continues to reside in Winnipeg.