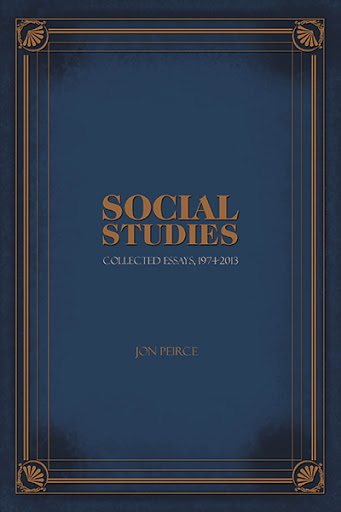 Just let me turn down that armadillo steak I'm cooking for dinner; then I'll be right with you. Such an easy recipe. You should try it. You just soak your 'dillo meat in a pint of bourbon in which you've been soaking a cup of cactus needles overnight. Keep the 'dillo meat soaking for about two weeks, until it starts to turn good and high. You'll know it's ready when you can get through it fairly easily with a hatchet. . .

If you thought the essay was dead, think again. In the hands of Jon Peirce, a writer with a wicked imagination, strong social conscience, and a keen sense of the absurd, the time-honoured genre takes many different forms. The essays in this book range from short, rapier-like skewerings of political hypocrisy and injustice to a leisurely exploration of the metric system and its implications for writers. In between you will find many pieces that will make you laugh, a few that will make you cry, and some that will leave you shaking your head in wonderment. Enjoy

JON PEIRCE has been writing since early adolescence. At age 14, he started a debate review at his boarding school; he has rarely stopped writing since then. His rich and varied experience, much of it reflected in the essays you are about to read, has included stints as a newspaper reporter and editor, social worker, English professor, industrial relations professor, industrial relations researcher, and union researcher and labour relations officer. He's the author of an introductory industrial relations text, "Canadian Industrial Relations," now in its third edition with Pearson Education Canada, and over 200 published articles, reviews, essays, and op-ed pieces. His work has appeared in such periodicals as The Globe & Mail, the Toronto Star, the Kingston Whig-Standard, the Ottawa Citizen, Books in Canada, and the Christian Science Monitor. Now retired from his union positions, Peirce lives and writes in Dartmouth, N.S. and teaches writing part-time for the Seniors' College of Nova Scotia. He is also pursuing a master's degree in history at Dalhousie (as if his two previous graduate degrees in English and one in industrial relations were not enough). His hobbies include tennis, swimming, cooking, theatre, progressive politics, and civilized conversation.