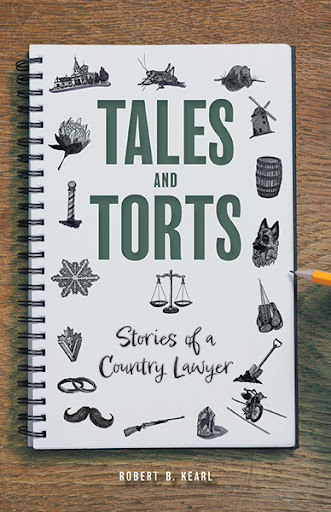 Tales and Torts
Stories of a Country Lawyer
by Robert B. Kearl

“The newspaper headline declared in large bold letters: “Shoot Out At High Noon.” Reading the first paragraph of the article disclosed the truth of the old saying, “don’t take a knife to a gun fight.” The man with the knife lay dead on the ground, while the fellow with the rifle fled the scene in his blue Ford F-150 full-size pickup truck” (from “The Love Triangle”).

Tales and Torts: Stories of a Country Lawyer is a unique collection of short stories proving the axiom, “sometimes the truth is stranger than fiction.” Each story recounted is based on a real legal case and each illuminates the human condition. Love, prized animals, tragedy, murder, swindlers and thieves, disgruntled family members, and hardened criminals. These tales involve a wide variety of cases in many areas of the law with astonishing fact patterns and extraordinary individuals chosen out of thousands of cases over a forty-year legal career.

From the Jewish Russian tenor escaping religious persecution in Russia, to the Tongan travelling to experience the miracle of snow in Canada, to Li jing, whose life was tragically altered on Chinese New Year’s Eve, each character is brought to life with humour, compassion, and an eye to achieving one goal: justice.

Robert B. Kearl is a retired courtroom lawyer (barrister) who practiced for forty years from 1980 to 2020 in the Province of British Columbia, Canada. His office was located in the historic village of Fort Langley, nestled on the Fraser River about one hour East of Vancouver.

Along with his partners, Don Nundal, John Cherrington and Hank Easingwood, Robert built a thriving law practice. Their clients came from every walk of life with every kind of legal problem from right across the Province. However, there were important priorities outside of the law, like family, politics, and tennis. Robert often instructed his receptionist to tell clients that he had gone to “court”, which his long-time clients understood to mean—the tennis court! He would call them back when the match was won!

Robert often jokes that some lawyers and judges are married to the law, but he is married to his wife, Elizabeth whom he affectionately calls, “Dearie.” Together for 45 years, the two enjoy four children and sixteen grandchildren with one great grandchild.