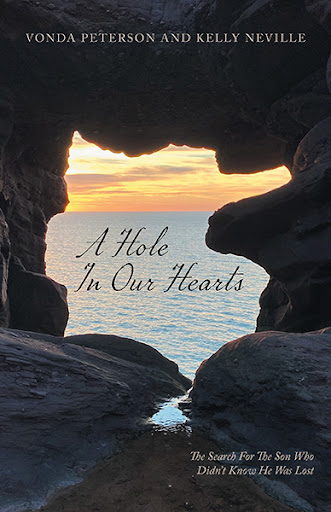 Vonda Peterson has a secret. After becoming pregnant in her teens, Vonda hides her pregnancy from her parents and puts her child up for adoption. For the next forty years, she imagines what his life must be like and how hers would have been with him. Even after marrying and having two more children, she celebrates his birthday every year. She keeps this secret from her children until she can’t any longer. But will her family accept her truth?

While we learn of Vonda’s life through the years, we also see the happy childhood and turbulent adolescence of Kelly with his unknown-to-him adoptive parents in Rhodesia. The story follows his many adventures from being “groomed by a gay man, groomed to hate and to kill by a country, groomed by a cult.” Kelly’s struggles lead him down numerous unimaginable paths that you can’t help but wonder: will he ever find where he truly belongs?

Co-authored by mother and son, Hole in Our Hearts is a memoir about perseverance, belonging, and speaking truths. Their stories show how two seemingly separate lives are entwined, connected beyond time and geographical distance, and slowly propelling towards one another until they finally meet.

Before the time when Skype and Zoom could’ve bridged the ocean between them, Vonda Peterson and Kelly Neville only had the telephone. During one of their late-night chats, they agreed to write their individual life stories to one another. After attending Red Deer College’s one-week course, Vision and Revision, mother and son were encouraged to share and publish their stories.

Vonda Peterson is a member of the Writers’ Guild of Alberta and Inkblots Writing Group. She has been a prolific writer since a young age. This is her first book. For almost fifteen years, she has been learning about her ancestors and the many branches of her family tree. When she’s not unearthing new links in her background, she enjoys many art mediums, particularly pastels, as well as playing bridge, computer games, and trail walking. She lives in Red Deer, Alberta.

Kelly Neville lives with his wife and two stepsons in Scarborough, United Kingdom. This is also his first book. If you’re interested in connecting with the authors online, be sure to connect with them on their Facebook Page and website for Hole in Our Hearts, coming soon.