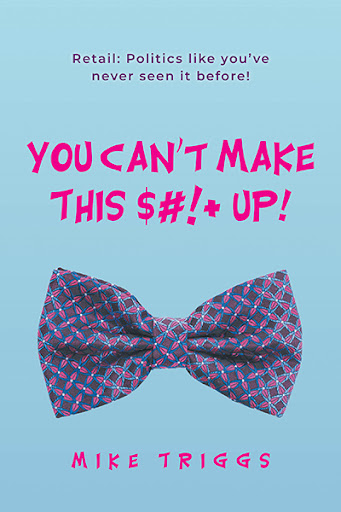 You Can't Make This $#!+ Up!
Retail: Politics like you've never seen it before!
by Mike Triggs

This can’t be happening! Mike Triggs had spent most of his life in politics, primarily working for the Republican Party. In fact, he was considered a political golden boy until his career is forever tarnished. While managing a governor’s re-election campaign, a right-wing opposing candidate unceremoniously OUTs him and he quickly spirals from the top echelons of the GOP to selling underwear at a high-end department store in Sheboygan, WI. Seriously!

Going from his comfortable closet to the retail world, Mike never expected the crazy drama he would encounter. From hoity-toity Sheboygan shoppers to crafty shoplifters, religious fanatics, screaming kids, racists, entitled “Karens,” and drag queens to an evil store manager and her slimy sidekick, a co-worker who thinks she’s an African queen and vicious coworkers scrapping over a whopping 1% commission—you just can’t make this $#!+ up! And Mike takes it all on with satiric flair while revealing his struggle with coming out, coping with the aftermath of the AIDs epidemic and finding true friends in unlikely places.

Based on true experiences, Seriously, You Can’t Make This $#!+ Up! is just as laugh-out-loud fun as it is undeniably heartwarming.

Prior to working for the Nordstrom and Von Maur department stores and a men’s boutique at the Phoenician Resort, Mike Triggs was a policy analyst for the Iowa and Wisconsin legislatures, worked for two governors and a secretary of state, and was a political appointee in the administration of former President George H. W. Bush and the executive director of the Minnesota Republican Party. He’s been a freelance writer and his guest opinions have appeared in newspapers throughout Minnesota, Iowa, Wisconsin, and Arizona.

After his experiences with the Republican Party, he became an LGBT and Democrat Party activist and was one of Pete Buttigieg’s early supporters in the Iowa Caucuses. For six years, he published a children’s newsletter, Letters from Trigsey. Children from 39 states and seven countries received a monthly letter from his imaginary dachshund. Trigsey’s tales have now expanded into a weekend radio show on Kid’s Radio Mania on KDPS-FM in Des Moines, Iowa. Mike currently lives in West Des Moines with his husband, Rick, and their dog, Rhys.