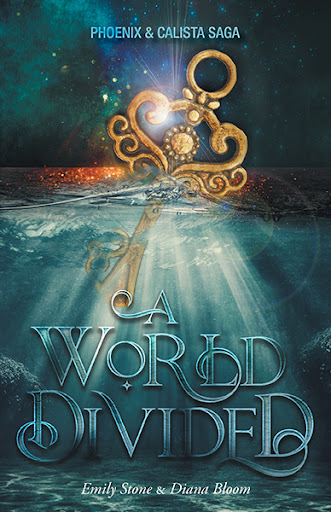 A World Divided
by Emily Stone and Diana Bloom

FRIENDS ARE THE FAMILY YOU CHOOSE

Queen Calista of East Marra and King Phoenix of West Marra are the newly appointed regents of the fractured LaMarra a once unified land driven by the magic of the Goddess of the River Marra. They now find themselves unwillingly thrust into their regal roles divided by the west’s want to control the chaos of magic with technology and the east’s dependence on the intrinsic value of the magic of the land. Diplomatic ties between the two halves of LaMarra are fraught. With sharp tongues and flaring tempers governing the relationship between the two regents, the line between passion and rivalry is paper-thin.

Forced to pick up the pieces of their families’ legacies and allied by a desire to see their nations prosper, Calista and Phoenix must set aside their differences to investigate LaMarra’s long-forgotten history—all while navigating their increasingly complicated relationship. With the help of their most trusted allies and a pair of mysterious keys and maps, Calista and Phoenix embark on a quest to discover the truth about LaMarra’s murky past.

What awaits them may threaten any tenuous peace they’ve built, but they are certain of one thing: unless they unite, their lands will spiral into war and famine, and everything they’ve fought for will be lost.

"A romance novel set in a fantastical land, A World Divided is an idyllic excursion into the ideals of equality and love."

Emily Stone & Diana Bloom were born to Italian immigrants who traversed the Atlantic from Italy to Toronto in the 1950s and 1960s. They both reside in Toronto, Canada, and have a passion for travel, crafts, fashion, makeup artistry, and literature. Writing has always been an important creative outlet, and they hope to help readers escape the mundane. A World Divided is their first novel.