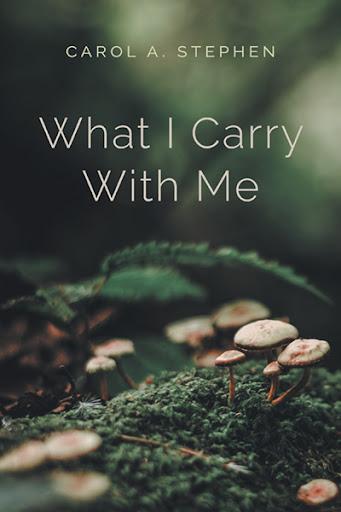 What I Carry with Me
by Carol A. Stephen

If you have ever wondered what the world looks like through the eyes of a poet, What I Carry with Me offers a glimpse. Only a hint because, as poet Carol A. Stephen illuminates, the world contains endless moments for pause, awe, and reflection. Using various poetic forms, this collection unveils the powers of the lyric and narrative, the beauty in ekphrasis and abecedarian. These poems take your hand and lead you through European cities, old-growth forests, hospital stays, and the intimacies of memory. Themes of conservation, existence, ageing, and reciprocity can be found in these lines. The real and imagined are investigated, the natural and clinical worlds unearthed. The taste of a mountain, the texture of air, or tripping over a bone—nothing is too small or ordinary for the poet to notice and revere with unique imagery, alliteration, and rhythm. These poems are honest as they honour the poet’s gaze.

Carol A. Stephen is the author of Winning the Lottery, Surviving Clostridium Difficile (Crowe Creations, 2019), five chapbooks, including the most recent Unhook (catkin press, 2018) and Lost Silence of the Small (Local Gems Press, 2018), and co-author of two chapbooks with JC Sulzenko: Breathing Mutable Air (Nose in Book Publishing, 2015) and Slant of Light (Nose in Book Publishing, 2016). Her poetry has placed in several writing contests and featured in Poetry Is Dead, Silver Birch Press, Topology Magazine, The Light Ekphrastic, and With Painted Words, among others. Her work has also appeared in two chapbooks edited by Lorna Crozier: Sound Me When I’m Done (Wintergreen Studios, 2016) and Teasing the Tongue (Wintergreen Studios, 2017). Carol is a member of The Ontario Poetry Society, League of Canadian Poets, and Alliance of Independent Authors. You can connect with her on Twitter @carolstephen2, Facebook under Carol A. Stephen, and her website https://quillfyre.ca/. When she’s not writing poems, Carol enjoys cooking and traveling. She shares her home in Carleton Place, Ontario with her brother, Norm, and a tortoiseshell cat named Molly.