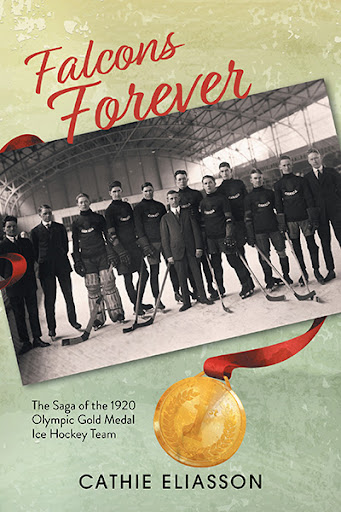 Falcons Forever: The Saga of the 1920 Olympic Gold Medal Ice Hockey Team chronicles the Winnipeg Falcons’ journey to the VII Olympiad in Antwerp, Belgium. The team was composed of young Icelandic men, except for one, all first generation Canadians, who had come of age in Winnipeg’s West End. Many had just returned from fighting in World War I, and had to overcome discrimination and other challenges to play the game they loved.

Author Cathie Eliasson, granddaughter of Falcons’ defenseman Konrad “Konnie” Johannesson, mined her grandmother’s trove of newspaper articles collected in 1919 to 1920 to write this team tribute. She skillfully uses the material to bring the players’ voices to the page one hundred years after the Falcon’s illustrious victory, bringing home the gold—and Canada’s first ever medal for Olympic hockey. Falcons Forever is brimming with historic photos and vivid storytelling, providing a fresh perspective on this fascinating time in hockey history.

Like her grandfather, Falcons defenseman Konnie Johannesson, Cathie Eliasson is of Icelandic descent. A member of the Society for International Hockey Research (SIHR), she grew up watching hockey and getting her daughters into the game. They played for the University of Manitoba, and now Eliasson’s grandchildren have her back at the rink, watching a new generation continue the family’s hockey tradition.

Falcons Forever will be available in the FriesenPress Bookstore soon.