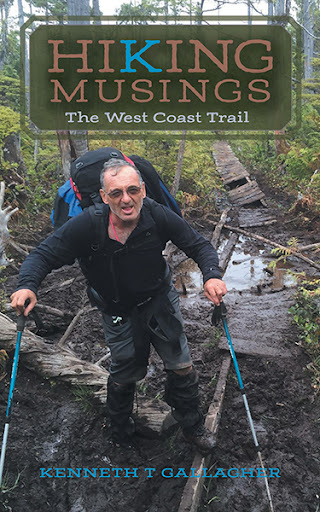 Sixty-eight-year-old Kenneth T. Gallagher may have been slightly ill-prepared for his first West Coast Trail hike. Still, armed with too much confidence and an out-of-date trail guide, he set off on an adventure. His number one priority: spend time and make memories with his son.

Soon, Kenneth was in it up to his knees, literally and figuratively. Between the constant rain, rough terrain, hundred-foot climbs, and sassy burger chefs, Kenneth found himself struggling through the seven-day hike on the world-famous coastline, once known for its frequent shipwrecks. But with the help of his son and unsinkable sense of humour, Kenneth made it to the end—though he almost lost his feet along the way.

Filled with stories of trials and triumphs—and some hilarious characters—Hiking Musings: The West Coast Trail is both a practical guide and a personal memoir, suitable for pro hikers and couch potatoes alike. It’s a tale of perseverance, grit, and the bond between father and son, with plenty of laughs along the way.

Brave Dee the Cree says that Ken's perseverance is a definite indicator of someone too stupid to know when to quit.

Patty from Seattle said that if they can send a man to the moon; why can't they send all of them ?

Kenneth T. Gallagher is a husband, father, and lifelong adventurer. An active community member, Kenneth enjoys pickleball, golf, hiking, skiing, and working with the poor. He is a member of the Society of St. Vincent de Paul, the Knights of Columbus, the Kinsmen Club of Edmonton, and the Pickleball League of St. Albert. Repeat winner of the Greatest Grandpa Award, Kenneth lives in St. Albert, Alberta, with his wife. Hiking Musings: West Coast Trail is is first book of musings.