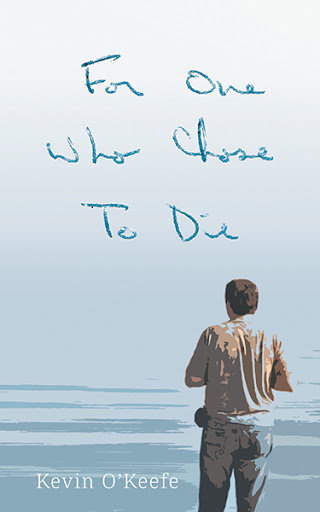 For One Who Chose to Die
by Kevin O'Keefe

For One Who Chose to Die interrogates the most fundamental question of existence: what is life’s purpose? Written by Kevin O’Keefe in the 1970s and 80s, these poems explore feelings about change and death, love and loss, beauty and pain, and grief for a lost childhood. This collection interweaves structured and free verse poetry in playful variety. The resulting posthumous collection reveals a man both grappling with depression and possessed of an abundant literary imagination:

I could see you clearly in my dreams

Or dust in streaks of sunlight

Slipping out of shadows into my vision

At some times joyful and reverent, at other times bleak and foreboding, For One Who Chose to Die offers insight into the mind of someone struggling to find their place in the world. This book will particularly resonate with anyone who has struggled with their mental health or is close to someone who has.

Kevin O’Keefe was born in Toronto on February 9, 1955 and grew up in Scarborough. He was a gifted athlete, playing on his high school's basketball and football team. He spent most summers during his youth at the family cottage, where he distinguished himself as an excellent water skier and swimmer. During high school, Kevin worked for many summers at Bark Lake Camp in Irondale, Ontario, an extremely happy time in his life and where he formed many lifelong friendships. It was here he earned his nickname "Chief", which stuck with him for life.

After high school, Kevin backpacked around Europe, living for a year on a kibbutz in Israel. He studied English at Trent University and he was an excellent poet, though he rarely shared his work publicly. He left for BC in the late 1970s to pursue adventure and ended up working at the Smelter in Trail for several years before moving up to Yellowknife at the encouragement of his brother, Harry. Kevin blossomed in Yellowknife and stayed for over 30 years. He began playing the drums and spent years as a stalwart of the local music scene. Most notably he played with Kanon, a band who opened for Blue Rodeo, Colin James and Lou Diamond Phillips amongst others in its heyday. He co-wrote their album "Crossroads" with Vince Gauthier. His most recent band was the Lonely Counsel, which played all over Yellowknife regularly until 2016.

Kevin began working at the Legislative Assembly in Yellowknife as the Legislative Planning Coordinator in the mid-1980s and held this position until he retired with over 30 years of public service. He weathered many governments, the separation of Nunavut from the NWT and had a hand in supporting the creation of many of the NWT's current laws.

Kevin's true calling in life came when his children were born in the 1990s. An utterly dedicated father, he gave selflessly to make sure they never wanted for anything and were loved unconditionally. This love extended to his larger family and Kevin spent most of 2018 supporting his brother Tim as he underwent cancer treatment in Edmonton. Kevin's heart was always at the cottage in Salerno Lake, near Irondale, Ontario and he spent many happy summers with his cottage family, swimming and water-skiing.

He retired to Peterborough in 2018, to be closer to his spiritual home. On July 31, 2019, Kevin succumbed to a lifelong battle with depression and anxiety. He completed suicide under a magnificent maple tree at the Peterborough Zoo. Kevin was a gentle, kind, creative and loving soul, beloved by many and desperately missed.