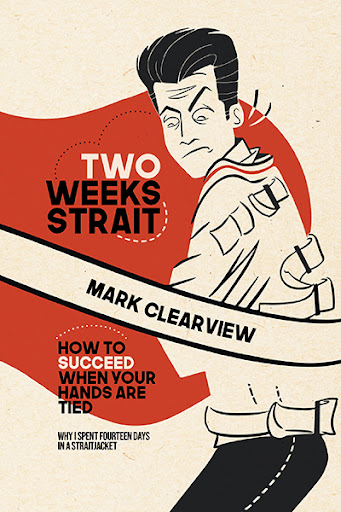 I spent two weeks in a straitjacket.

And donated the entire sum to

But why did I strap myself into an antiquated medical restraint

for fourteen days? How is that even physically possible? Why write a book about it?

Well, from heat stroke, to crashing morning television shows, to getting thrown out of amusement parks . . . I have a lot to say.

We’ve all felt restrained by circumstances outside our control—physically or emotionally. We’ve all been trapped or stuck in cities, relationships, or even our very own minds. What do we do when freedom and acceptance both seem out of the question? How do we succeed when our hands are tied? This book is about how I did just that and how, in turn, you can too.

“Our Foundation is grateful for Mark’s creativity and sheer lunacy in helping bring us one step closer to a cure.”

Mark Clearview is a world-record holding magician and comedian. He performs regularly across the globe (Qatar, France, Singapore, China) for large crowds and celebrities alike.

When he isn’t entertaining off-broadway in New York City, you can catch him performing at The Magic Castle in Los Angeles, or on Television shows like Penn & Teller: Fool Us. For the first time he shares his secrets to planning and executing Escaping Parkinson’s—the stunt that earned him a world record and international recognition.