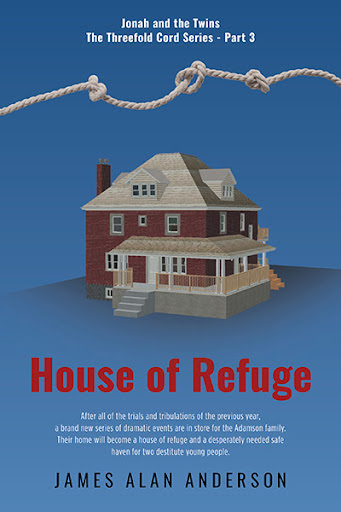 House of Refuge is the third book in the Threefold Cord series. Twins Kevin and Robert reach adolescence, and Kevin soon finds himself being drawn into an illicit relationship by a crafty young female manipulator. The twins also have to deal with a mentally unsound teen who has become obsessed with Robert’s girlfriend.

The twins’ younger sibling Jonah shares a secret with Kevin about his recent encounters with some vivid and frightening hallucinations. Neither he nor Kevin can make sense of what they might mean, if they mean anything at all. However, it soon becomes evident that these hallucinatory manifestations have a profound and disturbing significance.

The Adamson family takes on the responsibility of caring for a neglected and unloved young boy by the name of Matthew who is discovered bundled up inside Jonah’s play structure. He is injured, soaking wet, cold, starving, and somewhat emaciated. He was cast out by his abusive stepmother who is also a fanatical member of a vile religious cult. Matthew’s sudden arrival at the Adamson household sets in motion a series of happenings that will dramatically alter the future direction of this family.

House of Refuge is a continuation of the coming-of-age saga of Jonah and the twins as they grow a bit older. It is also a story about how they do their part to provide critical nurturing and support for abused young people who have suffered greatly from years of unrelenting religious indoctrination.

James Anderson and his wife Julie live in Winnipeg, Manitoba. James is a retired professional engineer whose career spanned 33 years in the field of telecommunications. James and Julie have three adult children and three grandchildren.

James took to writing fiction later in life, and House of Refuge was preceded by his first two books in the series, The Threefold Cord (also the title of the series) and Rebirth. The series will continue in the future with Part Four, Breaking Point.