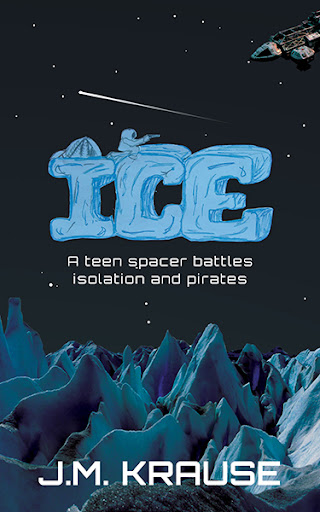 When melted into water, all life depends on it. Everyone needs this highly valued compound, and some are willing to do anything to get it.

Sixteen-year-old Mark Olson is an engineering apprentice on his family’s Rover ship, Start Over. Together, they live in the asteroid belt and search for ice—a precious resource that means survival, and profit, for anyone who can acquire it. When a giant piece of the family’s last haul breaks off, Mark volunteers to camp out on the frozen chunk of comet to ensure it isn’t nabbed by greedy pirates.

The catch? He must stay there for a whole month, completely alone and with dwindling supplies. Mark just wants to be useful to his family, but as his mission becomes riddled by equipment failures and technical hiccups, he learns that his greatest nemesis is one he hadn’t expected: loneliness.

But Mark isn’t as alone as he thought, and the company is far from polite. Pirates are on their way, and they will stop at nothing to get what they want, even if it means leaving Mark for dead before his family can return to save him.

J. M. Krause is a lover of science fiction, particularly young adult and coming of age stories. She is the author of High Orbit Hero (2012), How to Butcher a Chicken (2013), c-Surfer (2014), and Ice (2021). Having worked at a community newspaper for thirty years, she has won multiple awards, including the Bronze Quill from the Canadian Community Newspaper Association (CCNA) in 2007, the CCNA Environmental Writing Award in 2002, and the CCNA Historical writing award in 2011. She was also awarded the University of Alberta Writing Award through the Alberta Weekly Newspapers Association (AWNA) in 2011.