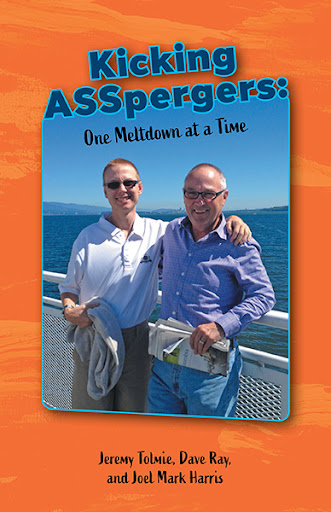 Kicking ASSpergers
One Meltdown at a Time
by Jeremy Tolmie, Dave Ray and Joel Mark Harris

“I was tired of feeling this way. I was tired of everything, and I just wanted it to end . . . What would happen if I lit the entire place on fire? What if I just stayed perfectly still and did nothing?”

Kicking ASSpergers is the triumphant memoir of one man’s journey with autism and his quest for happiness and self empowerment despite the many challenges life throws at him. Detailing his struggles with acute anxiety, depression, OCD, psychosis, suicidal ideation, as well as social stigma and medical bias, Jeremy Tolmie moves through his childhood, from the moment he was adopted by loving parents, through brutal school years being bullied and teased, and into adulthood, where he attempts to hold down a job, attend college, and live semi independently. Over time, Jeremy starts to alienate the people in his life with his erratic and dangerous behaviour, and finds himself in and out of various living situations, including psych wards. When he meets Dave Ray, a home share provider, Jeremy starts to learn how to “trust the process” and how not to let autism rule his life.

Written with humour, honesty, and compassion, Kicking ASSperger’s breaks down stigma and dismantles myths and assumptions about autism. This unique voice tells an inspirational story of friendship, trust, and perseverance in the face of adversity.

This is about a man who has Autism who has overcome extreme obstacles and made it out the other side in one piece. He tells his story about his journey from his adoption to the present. All the things he has gone though including what he did to his parents house. How he deals with meltdowns and all the psych ward visits that he had. It is a inspirational story and any one with Autism or who works or lives with someone with Autism will benefit from reading this book.

Jeremy Tolmie has written three previous books—Living with Asperger’s Syndrome, Living with Autism Spectrum Disorder, and Living on the Autism Spectrum. His goal in sharing his story is to inspire hope in others with autism, and their families.

He lives in home share in Nanaimo, British Columbia.