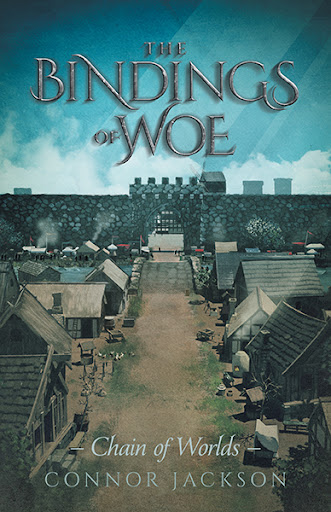 The Bindings of Woe
by Connor Jackson

The world of Gaia is in turmoil. Humans, goblins, and dwarves try to live their lives as best they can under the rule of the sovereigns—the strange and powerful race whose empire stretches to all corners of the known world—but order and stability seem to be fading. The quality of life has lessened, the strength and control of the Sovereign Empire has weakened, and a large movement of rebels, though many would call them terrorists, known as the Lost Seekers, are causing waves throughout the lands.

Nowhere are these changes felt more than the Isles, a small human province of islands, where sixteen-year-old Carver lives with his family and best friend, Helena, in the remote village of Verrel. During a routine trip to the provincial capital of Caswen, Carver and Helena suddenly find themselves in the middle of a violent conflict between the powers of the world, and soon after find themselves being hunted for reasons they do not understand.

Now pulled into events they never dreamed of experiencing, Carver and Helena, along with some close companions, are forced to fight for their lives during a journey of hardships. Monstrous beasts, hostile factions, and even nature itself plague their quest to find safety and seek answers, and nothing is gained without a struggle. However, their continued survival may be out of their control as the powers of the world vie for dominance against one another . . . by any means necessary.

Connor Jackson is an avid fan of video games and fantasy/sci-fi stories. Inspired by such tales, and tired of encountering stories that import real-world politics and agendas into their narratives and development, he finally decided to write a fantasy story of his own in the hopes of telling a captivating tale that anyone, from any group or walk of life, can enjoy. Connor lives in British Columbia, Canada, with his wife.