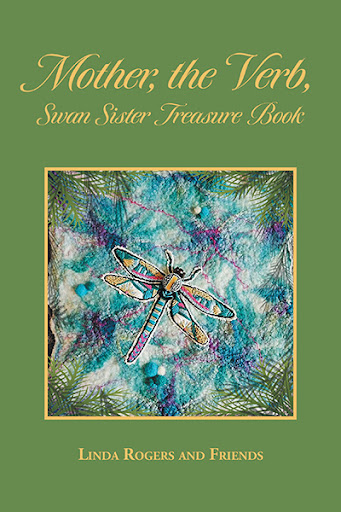 Mother, the Verb is a collection of work by established and aspirant artists, mostly women, but a few alliies, who serve the idea of One Human Family in their work. Some, like Heather Spears who drew and reported about the children of the Intifada, and Yolonda Skelton, designer emmissary for North Coast Peoples, or lyricist and novelist Karen Lee White are activists who have challenged the status quo in meaningful ways. Some, like ballerina Andrea Robyn Bayne excel at beauty and strive to nuture their art in the next generation. Most are environmentalists, none more eloquent than Maria Luisa de Villa, whose work exalts the earth that gives her inspiration and natural artist materials.

The Swan Sisters are a diverse group and we believe diversity is our strength. Like the yellow sweater mothers who support BLM, we look to finding common cause. And we have met resistance.

Central to the story I tell as editor is the failure of matriarchy following the Indian Act in Canada, a tragedy for one family that shines a light on the effort of church and state to collapse the integrity of First Cultures. Hopefully this book speaks in part for those who have been lost to this national tragedy.

During Pandemic many in this book transformed their art to support the cure. Artists designed masks. Storytellers entertained and educated captive readers through book, visual art and film. Now we pause to celebrate and lift up the next generation.

This is a collection. There are emerging artists among us but quite a few whose names tell the story. They are the strength we build on. We are stronger together. Our names suffice.