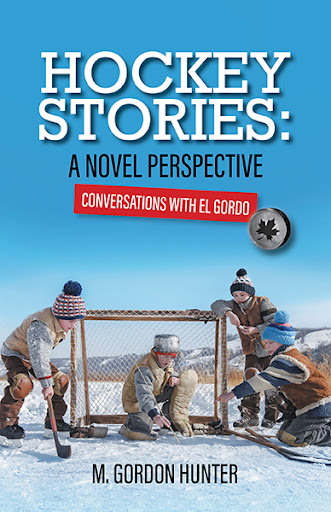 Hockey Stories is a fictional tale of two hockey players from rural Saskatchewan who find themselves on a winning NHL team. Billy Sinatra is accused of inappropriately organizing players to achieve the Stanley Cup win. Keeper was the goalie on his team. The story takes us from a confrontation in a first class airplane cabin, to NHL Head Office interviews, and back into the early junior league days of both players. Full of puns and light-hearted banter, the book’s narrator, El Gordo, brings in the tone of a play-by-play commentator.

Has Billy overstepped his role as a player, or is the accusation just the trumped up musings of a young columnist who is dating a jealous NHL wannabe? The truth is Billy’s talents and connections extend beyond hockey and charisma.

The back cover provides a joke photo and summary of chapters

M. Gordon Hunter was appointed Professor Emeritus upon his retirement in July 2016, having held academic positions at universities in Canada, Hong Kong, and Singapore. He received his PhD from Strathclyde Business School in Glasgow, Scotland. Hunter has extensive experience as a systems analyst and manager in industry and government organizations in Canada. He has written 4 academic books, and published over 110 combined peer reviewed chapters, journal articles, and conference papers. His research takes a qualitative approach, involving in-depth interviews, and he employs the same qualitative research techniques in investigating various aspects of hockey players and their teams.

At seventeen, Hunter was an All-Star at the Juvenile level in his position as goalie, and in 1966, he was awarded a university Molson Hockey Scholarship. As a young professional, he played for the Ontario Hydro head office and Caledonia Pharmacy hockey teams. He vividly remembers one unexpected save. If he was going to be scored against, he decided he would at least make it look good. He did the splits, flashed his glove in the air, and the puck went straight into his glove! His team went wild. He is soon to be admitted to the Hockey Hall of Fame.

Hunter is the author of three non-fiction books about hockey, The Older I Get, the Better I Was, Hockey Talk, and Hockey Players’ Personality, as well as two volumes of poetry, What Rhymes with Puck, and What a Dream I Made the Team. Hockey Stories is his first novel.