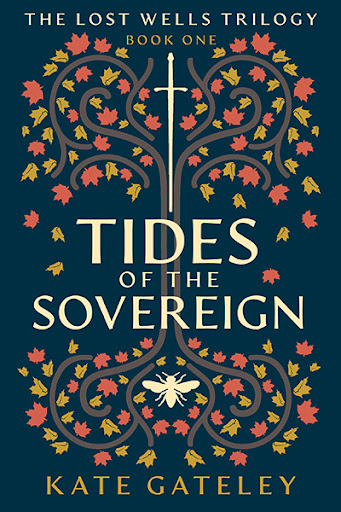 Tides of the Sovereign
by Kate Gateley

A centuries-old rebirth curse, an otherworldly Celtic prince, and an inescapable prophecy.

Thirty-year-old magic Bearer Julia Harrison had never given the notion of past lives or grand destinies any real credence or thought. She has knowledge of magic, and the power she shares with the women of her bloodline. She’s aware of the difference between Druids and Sorcerers, Wielders and Bearers, and so on, but regardless of all of that… her everyday life has always felt quite normal—distinctly unmagical—and never more so than as of late.

With the recent death of her beloved grandmother, Julia finds herself severed from the only sense of place she’d ever known. Grandma Gertie had all but raised her and was easily the strongest connection she’d had to her own magic, and that of the natural world. Without it, she feels lost. Disconnected. Unable to rely on (or even effectively access) her own limited magics in her current emotional state, Julia’s primary focus turns to placing one foot in front of the other as she resumes a linguistics degree that has taken far longer to earn than it should have.

But when a visiting professor arrives on her Vancouver campus—one who brings with him an odd sense of familiarity that’s almost as compelling as his raw Celtic masculinity, Julia knows that her life’s journey is about to change, heading off on an entirely new path. What she could have never predicted, or even dreamed of, was that somehow, they had walked that path together countless times before… each time towards their own inescapable deaths at the hands of Marcus Cassius Longinus, the indomitable “Child of Rome.”

"Gateley illuminates this fantasy novel with vibrant descriptions . . . A sprawling tale of love and magic with an engaging protagonist."

Author Kate Gateley holds a B.A. in Linguistics and a B.Sc. in Physiology from the University of Saskatchewan. Her continued areas of personal study include history, Celtic ideology, ancestral memory (and its impact on generational wounding), and the re-emergence of “The Divine Feminine,” all of which are significant influences on her writing perspective.

A lifelong fan of this genre, she has always wanted to add another story to its ranks—one with both depth and meaning. After carrying this one around with her for most of her life, when Kate sat down to actually put it all on paper, she relished the way her characters emerged so eagerly onto the page, almost seeming to come alive and dictate exactly what they wanted to say and do next.

Kate currently lives on a small farm in the Cowichan Valley, on beautiful Vancouver Island, with her wonderful husband and two sons, an adorable dog, a few outdoor cats, a number of chickens, and countless bees.

Look for books two and three of the Lost Wells Trilogy . . . coming soon.