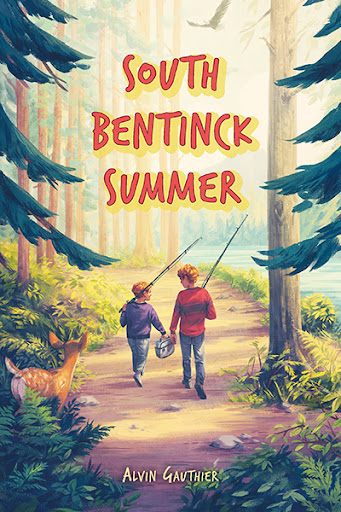 If you fly an hour or so from Vancouver to Bella Coola, South Bentinck Arm isn’t that much farther away. But this inlet on British Columbia’s Central Coast is an otherworldly place where encounters with bowhead whales, pesky porcupines and devil’s fish provide adventure and education for two brothers from Vancouver. South Bentinck Summer is the story of Tommy, age 10, and his know-it-all brother Chet, age 14, who stay at their dad’s logging camp for two glorious months. The boys roam the forests and waterways, discovering the wonder of the plants and animals around them while spying on beavers, catching salmon, battling a giant Pacific octopus, and rescuing a fawn.

Through their immersion in the natural world, the brothers also strengthen their own bond as they celebrate triumphs and overcome challenges together. They’re often joined by their friend Talyu Joe, a Nuxalk youth who further expands their perspectives and deepens their empathy for animals and each other with his knowledge and cultural connection to the land.

South Bentinck Summer is a vividly written book of tales that also reveal the Indigenous world and its history on this part of the coast through the eyes of Talyu Joe. With animals coming to life in chapters such as “Old Barnacle Back” and “A Lovable Old Bandit,” these captivating stories are sure to ignite the imagination of children and youth.

South Bentinck Summer is a coming-of-age novel written by the late Alvin Nelson Gauthier. After Gauthier’s passing in 1968, the manuscript passed down to his nephew Raymond Steinberg, who determined to publish the book. In the early 20th century, Gauthier spent many years in the natural world in the Pacific Northwest and as a fur trapper in the Arctic. “Uncle Al,” as he was known to Steinberg, was a great storyteller. He wrote various magazine articles, short stories and a memoir about life in the Arctic. South Bentinck Summer is his only children's book.