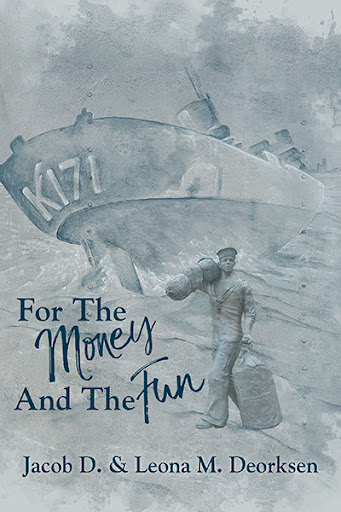 For the Money and the Fun
by Jacob D. Deorksen and Leona M Deorksen

This is life below decks—as far below decks as one can go in a corvette.

During the height of WWII, Ike walks into HMCS Chippawa (Winnipeg) to enlist in the Royal Canadian Naval Volunteer Reserve. He joins up with romantic notions of rising through the ranks and seeing the world—while rising to heroic heights fighting Canada’s enemies, and impressing his girl back home.

Ike’s dreams are soon replaced by the soggy realities of ever-imminent danger. Serving in the bowels of a corvette, tasked with maintaining critical Allied supply lines in the submarine infested North Atlantic, the threat of torpedoes is constant. While Ike’s ship navigates the Battle of the Atlantic, Ike himself has to navigate the treacherous currents of life aboard ship. Going ashore at ports of call, he tries to remain true to the promises he made to the girl he left behind. His adventures teach him that endurance is the better part of valor, and survival is his only reward.

Jacob D. and Leona M. Deorksen were partners in both writing and life. Jacob served in the RCNVR during WII, and was inspired by his experiences to tell the story of those whose service is rarely covered in books. Jacob self-published The Barbwire Threshold in 2002, and he and Leona collaborated on the 1988 edition of ILO's Management and Administration of Co-operatives.

Having married shortly before WWII ended, the Deorksens farmed in southern Manitoba until Jacob embarked on a career with co-operative enterprises. That culminated in an appointment as Co-operative Management Expert with ILO, where he served in India, Nigeria, Indonesia, and Botswana. After having their four children, Leona went back to school, eventually earning her Ph.D. in Literature. She continued lecturing at Memorial University of Newfoundland until she and Jacob retired to Vancouver. They had just finished the manuscript for this book when, in 2006, Jacob died of cancer. Leona still lives in Vancouver with her eldest daughter, and is now a great-great grandmother.