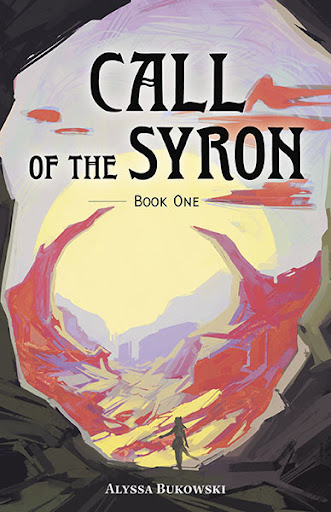 Call of the Syron
Book One
by Alyssa Bukowski

A princess born into a war-torn galaxy.

Two ancient beings with the power of suns.

And a dark prince, whose shadow blankets the galaxy.

Aladella, princess of Prytha, never imagined she would step foot off of her home planet. Especially, after the brutal murder of her sister and father. With the Darions invasion growing closer with every passing day, Aladella has no other choice than to run.

Escaping the Darion with the help of a masked bounty hunter/pilot, she finds herself in the company of those she once thought would leave her for dead. With her new unlikely crew, Aladella discovers long-hidden secrets and a magic that was once thought to be gone forever. Now she must balance her heart and her head as the galaxy is thrown into chaos around her.

After having visions of her mother's death, Aladella must return home with her rag-tag team of misfits in an effort to stop Darious and his army of silent soldiers. But, as Aladella learns more about the magic of a Syron, she realizes she may be the last hope in the fight against the Darion.

"I am so invested, I can't put this book down."

"I love how the author is making it hard for me to pick which character is my favourite."

Call of the Syron has been nominated by our staff as one of their favorite books.