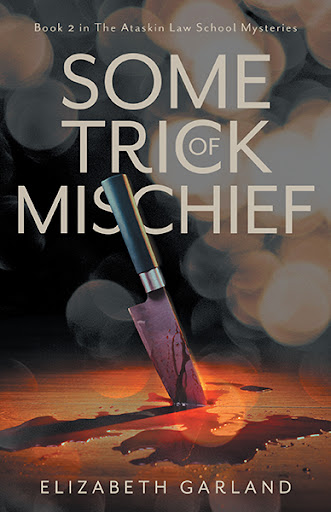 Some Trick of Mischief
by Elizabeth Garland

When Madame Justice Carol O’Reilly of the British Columbia Supreme Court arrives at the Marjorie Ataskin Law School to take up her position as first-ever ‘judge-in-residence,’ the dean is thrilled. Her presence will add prestige to his law faculty and will contribute to his reputation as a forward-thinking, progressive leader. But Dean Haverman cannot know that his distinguished alumnus has her own agenda for her sabbatical at the school, and within hours, her unconventional ties to university personnel and Victoria’s legal community begin to emerge. Her history of marital infidelity with Adam Gordon, now deceased, who had been married to a long-serving professor in the school, creates strain; her adversarial stance toward a student’s opinions heats up the school’s political atmosphere and triggers animosity in the student body; and her surprising requests, which become veiled threats, to acquaintances and accomplices result in anxiety, anger, and turmoil.

Just eight days after her arrival at the law faculty, Justice O’Reilly is found stabbed to death in her apartment, the scene closely resembling that of Adam Gordon’s death ten years before.

The diary-style narrative, told by an uninvolved storyteller but with observations by one of the participants, chronicles events from past and present. It explores how our past history influences our beliefs and our choices and challenges the new philosophies that are rapidly replacing traditional beliefs about the law and its role in society. The deft intertwining of past and current events accentuates that finding the truth is not always easy or simple but requires persistence, faith, and an unwavering determination to reject tricks, mischief, and lies.

An engaging, skillfully written whodunnit, Some Trick of Mischief, discloses the dramatic and unexpected events that challenge perspectives and disturb cherished assumptions in the small Beacon Hill University community.

Elizabeth Garland is an established writer, having written fiction from an early age. As a long-time academic, Garland also published numerous scholarly works, including journal articles and an award-winning book.

During her lengthy career as a professor and university administrator, she became thoroughly cognizant of the attitudes and politics of campus life. Her academic research pursued questions related to law and human rights. In her second mystery novel, Some Trick of Mischief, she continues to transfer her research interests to a fictional setting and to display her intimate knowledge of the university environment and culture.