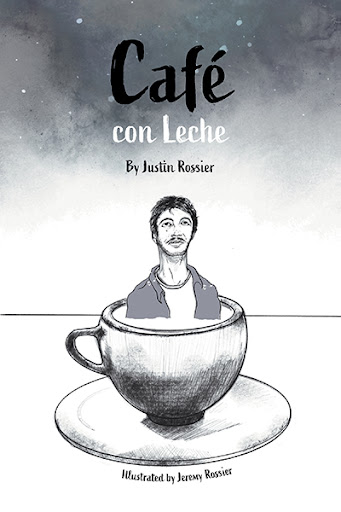 Roland Perez is a university student haunted by family trauma and loneliness. When Ron begins his first year of university in Montreal, a sense of detachment from his family weighs heavy on his shoulders. His life becomes derailed by Illusions of medieval warriors walking down shopping districts and visions of large gates defended by an imperial guard, making Ron lose faith in himself and his sense of reality. Out of the blue, Ron is approached by Vince and Chico: 40 something mercenaries, one a martini-seeking Philadelphian, the other a Guatemalan soccer fanatic. They take Ron on mysterious excursions and celebratory nights out, until the unexpected happens. Ron closes his eyes. In the ensuing darkness, one of those large gates opens, and he passes through. On the other side, he finds Café con Leche.

Justin Rossier was born in Switzerland and was raised in Vancouver, British Columbia, and Lugano, Switzerland. After living in Italy in his early 20s, he returned to Canada to attend university in Montreal, Quebec, which is when he wrote the first draft of Café con Leche. He obtained a BEd and MEd and has worked as an educator since 2006. He enjoys making eclectic playlists, following European soccer, enjoying the great outdoors and spending time with people he loves. He lives in Guelph, Ontario, where he wakes up every day and makes himself a café con leche.