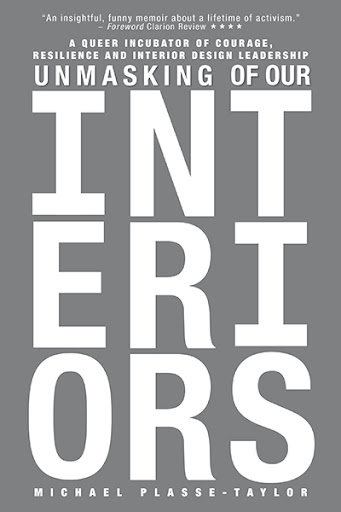 Unmasking of Our Interiors
A Queer Incubator of Courage, Resilience and Interior Design Leadership
by Michael Plasse-Taylor

A memoir of survival, rebellion, and tenacity, this narrative follows the author’s incredible life journey, from survivor and outcast to mentor, ground-breaker, and advocate for LGBTQ+ rights. Born a preemie and raised in disfunction and poverty on Toronto’s Skid Row, he was deemed a “sissy-boy” and “faggot” at a young age, as well as someone who “thinks he’s better than us” for the cardinal sin of dreaming of a better life.

Never letting those negative voices define who he was or what he could become, he found his voice and stood firm, knowing that education, curiosity, and a passion for finding his own way in life, through trial and error, were his compass to happiness and success. Becoming the first person in his family to ever go to university—eventually earning a Master’s Degree in Interior Design—his outlook grew and evolved, allowing him to finally find and embrace the person his family had always rejected … the person he was always meant to be.

Though touching upon many difficult subjects, from childhood abuse and abandonment to the Aids Epidemic and its devastation impact on the gay community in the 1980s and early ’90s, this story manages to be highly entertaining throughout, overflowing with insight, wisdom, humour … and no small amount of sass.

"Professor and activist Michael Plasse-Taylor’s LGBTQ+ memoir Unmasking of Our Interiors ... covers his most pivotal memories from a reflective perspective, tinging them with of-the-moment humor, heart, and optimism. Plasse-Taylor is also a compassionate, entertaining guide through the experiences of queer communities in Canada and the US Northeast across decades. ...Instead of indulging of negativity, Plasse-Taylor prioritizes the brighter outcomes of his recollections.

Centered in LGBTQ+ communities during the 1980s and 1990s, Unmasking of Our Interiors is an insightful, funny memoir about a lifetime of activism."

"The author’s prose is earnest and introspective, weaving the darkest moments of his upbringing with joyous passages about New York City’s 1980s queer nightlife scene and, later, about his students. The memoir makes the case that, just as the interior of a space must be revealed to be designed, so must we uncover ourselves and accept the flawed humans we are.

A moving examination of personal trauma and the healing power of queer community." 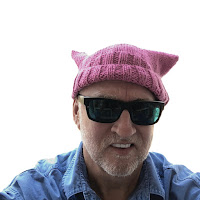 With a Bachelor and Master’s Degrees in Interior Design, and decades of international experience as both a practitioner and educator, as well as being as a long-time advocate for LGBTQ+ issues, Michael Thomas Plasse-Taylor has been encouraged by friends and colleagues to write (and publish) his story for years. And now that he’s retired, he has finally found the time to take their advice, in the hopes of sharing a very personal queer narrative—paired with professional interior design experience—to educate, inspire, and challenge the status quo, promoting diversity as a key to creative problem-solving, communication, and personal growth.

Michael is very much enjoying his life and the freedom that comes with being retired. He resides in the heart of the Gay Village in downtown Toronto, with his white boxer, “Missy,” his tuxedo cat, “Ribs,” and his Savannha cat “Kit,” who give him reason to smile every day.