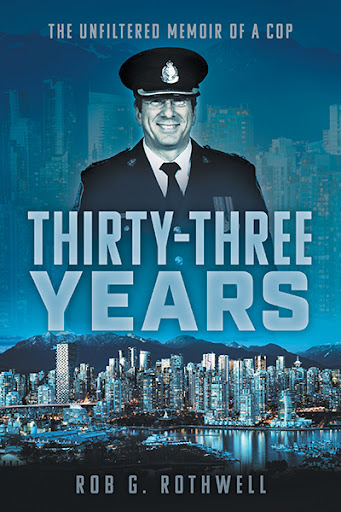 Thirty-Three Years
The Unfiltered Memoir of a Cop
by Rob G. Rothwell

“TAKE A RIDE IN THE FRONT SEAT OF SOCIETY’S ROLLERCOASTER”

“That was it. That was the moment I knew I wanted to be a cop.”

When Rob Rothwell is a naïve, directionless eighteen-year old, he gets invited on a ride-along with a young cop … and the wild night that ensues sends him hurtling into a thirty-three-year career in policing. And in this unabashedly unfiltered account of his years in Vancouver PD, Rob takes readers on their own thrilling ride-along.

With tough-guy wit and unexpected well-springs of deep compassion, Thirty-Three Years shows the best and worst of humanity from the perspective of a cop daily putting his life on the line in the streets of a great city. From the wild action of a car chase; to dogged evidence-gathering; to the dangers and intricacies of an undercover drug operation, to confrontations with sudden, unspeakable horror, Rob’s wry, humanist perspective brings us inside the life of a cop. His story will appeal to the legions of police procedural fans out there as well as those considering a life in law enforcement. And for those who simply love memoir as a way of vicariously living fascinating lives—it will not disappoint.

"Take a ride in the front seat of society's rollercoaster"

“…an easy-to-read, ‘buckle-up, we’re going for a ride’ memoir that will make you smile, maybe cry and possibly raise your blood pressure.”

After retirement, he returned to the VPD as civilian manager of Fleet Operations, assessing fleet needs from patrol cars and trucks to motorcycles and boats. Rob lives in Vancouver, where he was born and raised, enjoying its outdoor activities, including cycling, skiing, and sailing his Laser in English Bay. He’s now fully retired from VPD but remains active in TV development and production.