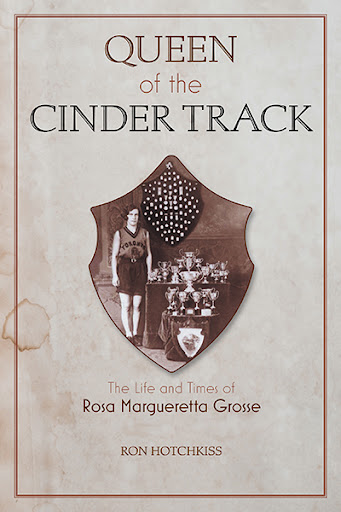 When Rosa Grosse first ran at the Canadian National Exhibition's Athletic Day in 1923 she never imagined the heights she would reach in the sport of sprinting. Already known as a fine basketball player, she became a world record holder and arguably the finest female sprinter Canada ever produced.

Her running earned her fame and publicity she did not seek. Never comfortable in the spotlight, she was a reluctant sports hero who was celebrated and acclaimed throughout the country. By her achievements she brought women's running from a sideshow entertainment at picnics and men's competitions to the international stage. As such, she was a trailblazer, breaking down barriers and rousing young women everywhere to take up the sport.

Her story is an inspiring one. While achieving greatness she faced a significant personal challenge. She was losing her hearing.

Ron Hotchkiss is a retired high school history teacher who became interested in Rosa Grosse when researching his book, "The Matchless Six: The Story of Canada's First Women's Olympic Team". Grosse's name kept appearing in reports of women's track and field meets, especially those of her victories at the prestigious Millrose Games, held each year at New York's Madison Square Garden.

Wanting to know more about her, Hotchkiss embarked on a voyage of discovery that lasted five years. Along the way he met Grosse's daughter, sister-in-law, and a number of her contemporaries. In so doing, he discovered one of the many forgotten stories of Canadian history - one that inspired pride in an earlier generation of Canadians.

"Queen Of the Cinder Track" is an attempt to bring Rosa out of the shadows and give her the recognition she so richly deserves.