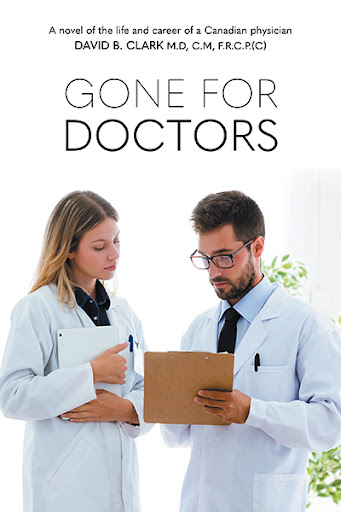 Gone for Doctors
A novel of the life and career of a Canadian physician
by David B. Clark

The author has seven published novels. His enduring interest in Canadian Army history is based on having attended the McGill medical school through the Regular Officer Training Program which required three summers of basic and field training followed by three years of military service as the Regimental Medical Officer with the Second Battalion of the Royal Canadian Regiment.

The early historical novels consisted of the Canadian Army Trilogy in which the first had to do with the Verrières Ridge in Normandy; the second with the costly river assault crossing of the Lamone River in Italy; the third novel goes back to the First World War, Lucifer’s Gate, after the Menin Gate through which the Canadian soldiers passed on the way to the Flanders battlefields.

The next two novels included The Afternoon of the Women, about therapy in a psychiatrist’s office, and the second, North of the Tai, about a boy growing up in Japanese occupied China.

The most recent two novels were about the War of 1812, the first, The Red Dawn, on the battles for Niagara, and the second, Bastion of Empire, was about Fort St Joseph.

This brings us to Gone for Doctors, the eighth novel, not an historical account but about doctors. Don MacMillan visits the land lady for the boarding house he shared with the main character, Michael Hogan, when they were students at Western University. Don wanted to know had Michael already left for the McGill medical school. He was told that Michael had “Gone for Doctors.”

Four medical students form a study group they call their cabal, which meets after the weekly pathology class. The cabal helps them though the cadaveric stench of the anatomy laboratory, and the ancillary classes in histology and physiology of their first year of medical school. It follows them through their clinical years, their personal lives and medical careers.