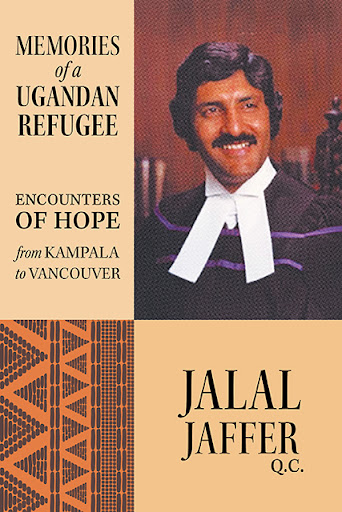 Forced to flee from one’s homeland with only a few suitcases, most would be bitter. However, Memories of a Ugandan Refugee is a story of gratitude for a country that opened its arms to those needing a safe harbour. Within its pages, Jalal Jaffer tells his story of growing up in Uganda and his dangerous escape from his country with his wife, Shamshad, when they and thousands of other Asians are forcibly expelled by Idi Amin in 1972. Feeling blessed with the “warm embrace” offered them in Canada, Jalal and his wife quickly adapt to their new country and eventually settle in Vancouver.

After completing a law degree and being called to the Bar in British Columbia in 1978, Jalal balances his work and family life with service to the Canadian Ismaili Muslim community. Taking on increasing senior leadership roles in the community, Jalal serves two terms as Chairman of the Ismaili Tariqah & Religious Education Board for Canada (ITREB) and is named the Mukhi of Darkhana of Canada in 2002. As he documents the blessings he receives through service, he also captures important history of the growth of Ismaili Muslim institutions both in Canada and internationally.

Filled with recollections and anecdotes – some meaningful and some humorous – of fascinating times, events, and people, as well as interesting reflections and moving poetry, Memories of a Ugandan Refugee is ultimately about one man’s journey on this planet as he seeks to live life well and serve family and community.

Jalal Jaffer was born in 1945 in a small town called Kitale, in the highlands of Kenya. He moved to Kampala, Uganda with his family when he was three and spent his childhood there, growing up as one of nine children. As a young man, he went to school in London to earn his Bachelor and Master of Science in Economics. After coming to Canada, he earned his Law degree from the University of British Columbia in 1977, and in 2015, he was named Queen’s Counsel by the Government of British Columbia.

Today, Jalal lives with his wife of almost fifty years in a lovely home along a river in North Vancouver. They have two adult sons, Jamil and Rumi. Jalal is a devout Ismaili Muslim and says, he wrote this story to tell of his “gratitude for the divine grace and blessings showered on me like rain and my effort to collect in my container as much as He wishes me to have.”