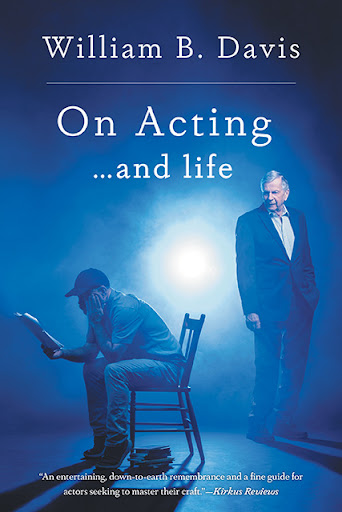 On Acting ... and Life
A New Look at an Old Craft
by William B. Davis

Dozens of books on acting exist, but none of them are quite like this. On Acting and Life provides both insightful acting advice and the memoir of an acclaimed actor of both stage and screen. Modelled after Stephen King’s bestseller, On Writing, the book is divided into two parts.

Part one takes readers on a seventy-year journey that begins with William B. Davis, at age twelve, riding his bicycle through the streets of Toronto to his first acting classes, and eventually leads to him starring in the long-running television series, The X-Files. From a summer theatre in Ontario to the National Theatre of Great Britain to the National Theatre School of Canada to the William Davis Centre for Actors’ Study in Vancouver, few have achieved such a colourful journey. Along the way, Davis met all sorts of familiar faces, including Donald Sutherland, Brian Cox, Albert Finney, Laurence Olivier, Maggie Smith, David Duchovny, and Gillian Anderson, among others.

Although there is a lot about acting in part one, the heart of the book for an aspiring or working actor is in part two. What has Davis learned in seventy years of working both in the theatre and in film and television? A lot, as you will see. Davis’ grasp of the art of acting is vast and practical. And in some ways, original.

In his final chapter, Davis explores the underlying philosophy of acting and actor training and argues for bringing the work in to the twenty-first century.

"This book celebrates a lifetime’s passion and commitment to the mysterious realm of acting. It’s not a tale of fame, fortune and gossip, but instead it documents the twists and turns of an artist’s determined engagement with making and sustaining a career in Canada for over sixty years. It’s a history lesson and an inspiration, reminding the discouraged actor that you never know what’s coming round the corner so be prepared and keep the faith. The discussion of what makes for good acting is a wealth of practical, clear advice, mined and honed in decades of devoted exploration as an actor, director, and teacher. Gold!"

"Before he was my cigarette smoking nemesis for over 25 years, before he incarnated one of TV’s great villains, William Davis was an acting teacher. It’s not true that those who can’t do, teach, because Bill can do both. And he can write. Like all good teachers, the wisdom and stories that Bill elaborates upon in his book are really lessons about life. It’s possible you will become a better actor after reading Bill; it’s also possible you will become a better person. For fans of the X-Files or just people who enjoy listening to a no nonsense craftsman and lifer talk about his craft with none of the usual humble-brag or sensational Hollywood bullshit."

—David Duchovny ( Novelist and Star of the X-Files )

"Bill Davis’s ‘On Acting’ is a fascinating tapestry of a life dedicated not only to the Art, but also to a deeper philosophical grasp of our work. Bill chronicles a highly personal journey that is founded in the search for a truth that truly illuminates the mystery of our craft!"

"Bill’s vast experience, on stage, screen and as a teacher is more than impressive, it’s a rarity in our culture of instant fame. I cast him as a villain 30 years ago, but little did I know he’d always played to win."

—Chris Carter ( Creator of The X-Files )

After decades of working as a theatre director and actor in Canada, the UK, and the US, William B. Davis rose to prominence as the Cigarette Smoking Man on TV’s The X-Files. Besides appearing in numerous other TV shows and movies, most recently, Upload and Midnight Club, Davis also founded his own acting school, the William Davis Centre for Actors’ Study.

Davis has written one other book, a memoir entitled Where There’s Smoke… The Musings of a Cigarette Smoking Man. He lives in Vancouver, B.C., with his wife, Emmanuelle Davis.